WATCH: The “Frightening” Moment When the Ultimate Warrior Body Slammed Andre the Giant for the First Time

One of the most memorable and famous moments in world wrestling transpired when Hulk Hogan body slammed Andre ‘The Giant’. This was arguably the most talked about moment at the time, and it kick started Hulkamania. But did you know that the Ultimate Warrior also did the same?

The Ultimate Warrior’s feud with Andre ‘The Giant’

In WWE Biography: Hulk Hogan & Ultimate Warrior Rivalry – The UNTOLD Story, we get to see what went on behind the scenes of that epic moment.

Andre ‘The Giant’ was one of the most beloved wrestlers in the world at the time. WWE’s booking of a feud between Warrior and The Giant, generated a huge interest in their product. It was the talk of the town, if not the world.

One of the key features of Andre ‘The Giant’ was that if a wrestler was somehow able to defeat The Giant or even slam him, that wrestler became a household name. This is precisely how Hulkamania started at WrestleMania 3.

In the biography, the Ultimate Warrior himself explained that Andre never did anything he didn’t want to do. Warrior recalled how frightening it was for him when the seven foot monster asked to be body slammed. 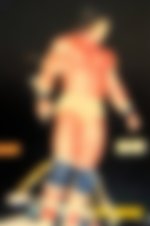 Was the Ultimate Warrior on the same level as Hulk Hogan?

Slamming Andre in the WWE ring meant people could compare the Ultimate Warrior to the ultimate star, Hulk Hogan. This was because no other wrestler besides Warrior and Hogan achieved this incredible feat of strength.

Now, fresh off his feud with The Giant, there was only one place for Warrior to go, and that was Hulk Hogan.

The Ultimate Warrior was next in line to be the new face of WWE after the ‘Hulkster.’ This created a professional rivalry and jealousy between the two baby faces in the company.

The rivalry made sense as to be on the toptop, you have to prove that you’re better than the other wrestler. This led to one of the greatest feuds in wrestling. You can watch the full trailer of the biography here.

What are your thoughts on the Ultimate Warrior and his contested legacy? Comment down below and let us know!