Delhi vs. Mumbai – No other two cities match their sporting history

Today VIVO IPL 2016 promised a hot affair between the Delhi Daredevils and Mumbai Indians at the former’s home ground, Feroz Shah Kotla. Delhi got to a just above par score aided by Samson’s half century and former Delhi captain, Duminy’s 31 balls 49. DD managed 164-4 in 20 overs. In defense, MI contended with 154 in their 20 overs. However, MI’s Captain Rohit Sharma
scored 65 runs off 48 balls until he collided with Pandya and got run out.

Some stats of the match:

1. Rohit Sharma has scored 624 runs against Delhi Daredevils in IPL – the most by any batsman against them. 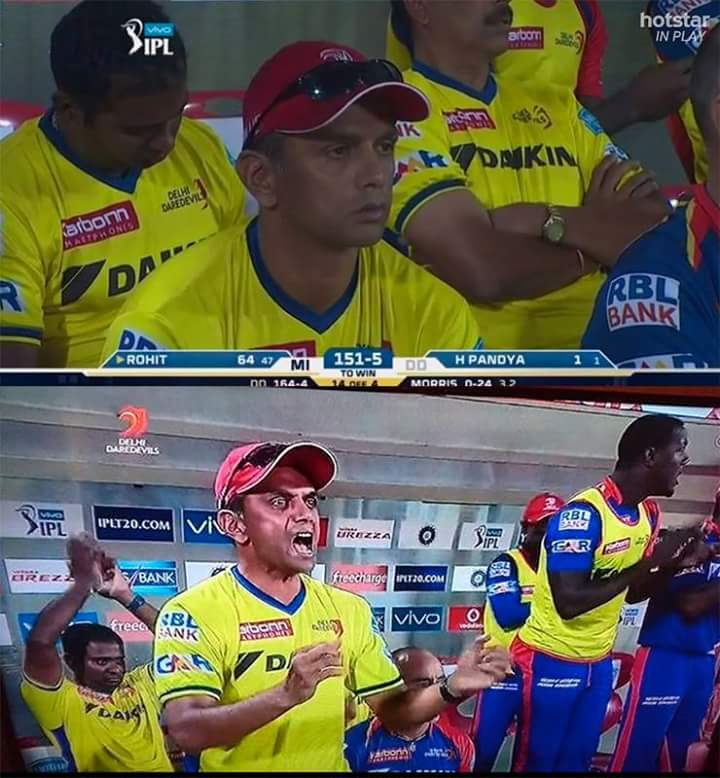 That’s “special” Rahul Dravid for you!

7.  Highest run-rate of MI in the match after 13 overs was six runs per over.

DD pulled back strongly with Tahir and Mishra.

Hardik Pandya collision woes:
Earlier in the first innings, Pandya came off worse when his jaw knocked against the big shoulders of Jos Butler while trying to save a boundary. Unfortunately, the umpire signaled four runs as one of the fielders was in contact with the boundary line.

And then, Pandya collides with his skipper Rohit Sharma in the middle of the pitch while running. That collision cost Rohit his wicket and MI, the match.