Just two years back, it was impossible to think that Chris Jericho and Eric Bischoff would be under the roof of a wrestling promotion that was not the WWE. More than that, they would be live on TNT, a network that broadcasted the glory days of the WCW.

It’s no secret that Chris harbors bitterness for WCW because of how he was used there towards the end of his tenure. Despite being the most talented performer on the roster along with Chris Benoit, Eddie Guerrero and Dean Malenko, he was sidelined by washed up stars of the NWO. 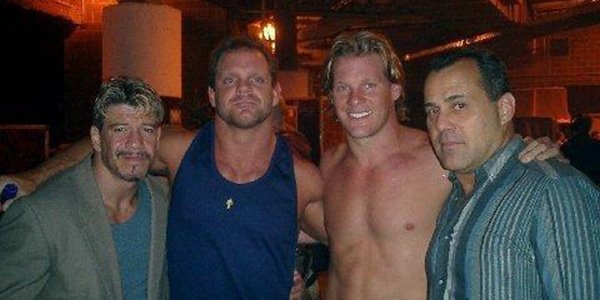 Whether or not that bitterness ever extended to Eric Bischoff is anyone’s guess. Despite everything, the two have seen a lot more in the wrestling world ever since.

At present, they are both committed to providing a viable wrestling alternative in the form of All Elite Wrestling. It’s only fair that they are the guys to support such a cause. They were never establishment guys but men who had a creative mind towards the business.

With the entire Orange Cassidy debate saga, Jericho and Bischoff collaborated to put over a young Superstar with tons of potential. They continued their tremendous work on social media.

Chris Jericho put out a hilarious tweet saying that it’s been 25 years and he still hates Bischoff, obviously an allusion to their time in WCW together.

Eric wouldn’t stay quiet after this allegation. He called Jericho a sour loser.

Declaring @orangecassidy the winner of that debate was just…2Sweet! He ate your lunch and stole your bike with his global warming stance. Get over it. https://t.co/771492e8fA

Orange Cassidy’s speech on global warming was indeed pretty good. It offered comedy gold, thay was multiplied with the expressions of Jericho.

Next week, the two collide in a rematch. If Cassidy loses, he has to pay La Champion $7000 for ruining his white jacket with orange juice. However, as Cassidy had pointed out, if he wins, it’ll be the biggest embarrassement for Jericho.

Tune in to AEW Dynamite next week to watch this match.