This week’s Blood and Guts Special Edition of AEW Dynamite had a terrific end. The Pinnacle stood victorious over The Inner Circle, and the entire world cannot stop talking about it.

However, there was another exciting match that kicked off the show. Jon Moxley and Eddie Kingston took on Kenny Omega and Michael Nakazawa!

Last week, Jon Moxley and Eddie Kingston attacked the AEW World Champion Kenny Omega. They didn’t just attack him but also forced Don Callis to book a match between them and Omega-Nakazawa for this week. Callis had no other choice but to give in. 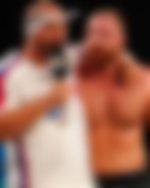 One week later, Kenny’s guys were well prepared. Callis came out and revealed that Omega wasn’t in the building.

Hence, Michael Nakazawa would take on Jon Moxley and Eddie Kingston alone. However, this was just a ploy to give the ‘Belt Collector’ a chance to ambush Moxley.

Moxley laid on the outside, but the match had begun already. Both Omega and Nakazawa double-teamed on Kingston, but the ‘Deathrider‘ returned to the ring and made the save. The action got even between the two teams.

Moxley and Kingston picked up the pace and built on their momentum. The match had even offense from both sides. It had everything – power moves, agile moves, and a perfect story.

What it lacked, however, was more time. However, we agree that they had other matches on the card that needed to make it on air in the 2 hours.

Either way, the match set the perfect tone for the entire show going forward. Jon Moxley and Eddie Kingston looked like perfect faces, and the end made Kenny look like the perfect sore-loser heel.

Mox and Kingston hit Nakazawa with an impressive tag team finisher to pick up the win while Kenny looked on from ringside.

A planned attack by #theElite on Mox & Kingston

Post-match, The Young Bucks and The Good Brothers attacked Moxley and Kingston. Kenny Omega entered the ring again as both men were laid down.

He asked Cutler to put Kingston on his shoulders and then connected with a One-Winged Angel. To add salt to the wound, Omega mocked Kingston by covering him for an imaginary three count.