Roger Federer’s Cars – The Luxurious Life Of The Swiss Star

Rafael Nadal’s training routine has been an area of curiosity for his fans and for fitness enthusiasts. The Spanish bull works like a machine on the court and has an incredible physique. Despite multiple injuries providing impediments, Rafa has managed to be in shape.

With that being said, let’s explore the fitness mantra of one of the fittest athletes out there in sports.

What Do We Know About Rafael Nadal’s Training Routine?

The Rafa Nadal training programme consists of extensive strength training during pre-season and light work during the regular season. Majority of his fitness prowess is due to hours spent on the court.

9:30- practice on the tennis courts

How Does Rafa Start With His Training?

He begins with a vibrating platform that contracts muscles 30-50 times a second. This helps in blood circulation, flexibility and range of motion. For a player like Nadal, it is more crucial as it helps in reducing injury recovery times.

He alternates between band work and various poses on the vibrating platform.

Nadal begins working with resistance bands after several minutes on the vibrating base. He pulls with one hand both across his body and from front to back. Post this, he grabs two pulleys and pulls front to back again.

These pullies carry a distinct advantage overweights. First, they are far more transportable than weights. Secondarily, variable resistance allowed by them is higher.

The major benefit of these bands is that it helps to work the essential areas of shoulder and rotator cuff. They do it more effectively than free weights.

This consists of standing anchored to the wall by bands around his knees. Post this, he does a variety of push-ups.

The exercise ball comes past. Rafa balances on it for light sit-ups that works multiple muscles in the core. Obviously, the lower back is worked in a more strenuous manner because of the ball, as compared to a regular sit up. In fact, he also uses the ball to do a plank. He achieves this by resting his elbows on the ground while his feet are elevated and resting on top of the ball. 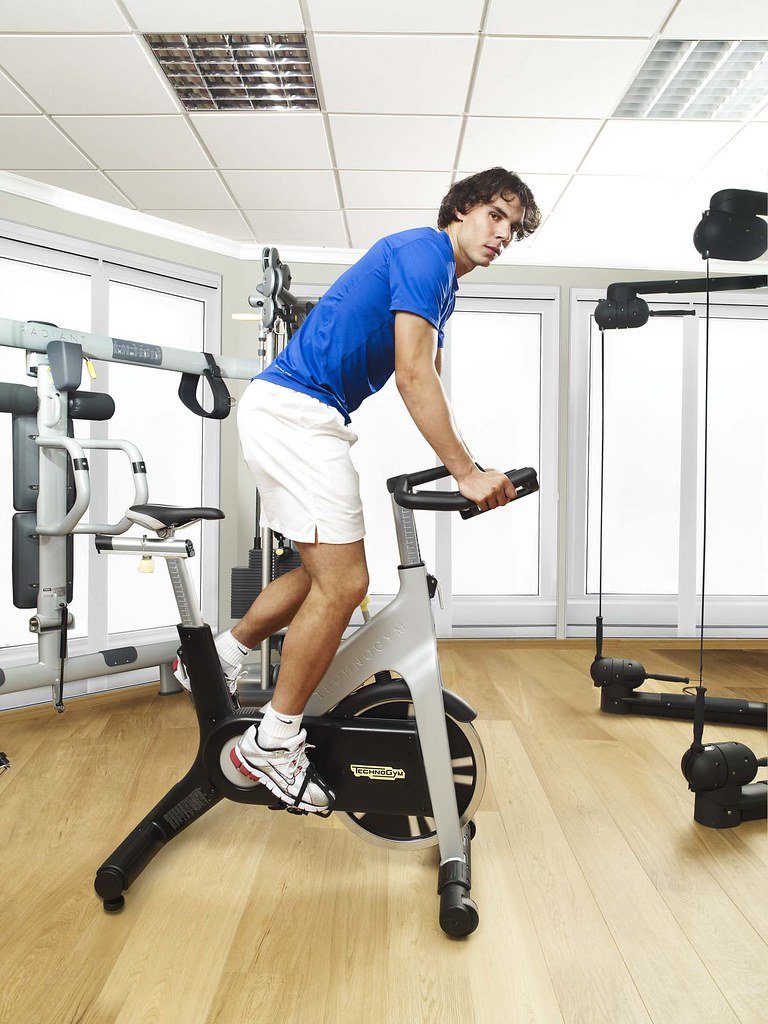 The core workout ends on a light note. This is done by playing a round of catch with his trainer, by using a medicine ball. With this, Rafa is careful to turn his body completely with each toss. This happens to fortify the muscles that will be used later in the week or month.

Finally, Rafael Nadal training routine ends with a round of stretching. Rafa considers this as the key to his overall fitness.

His personal therapist stretches him out every day, working different muscles at each point considering the requirement of the period.

Nadal stretches his lower body more during the grass-court season due to the low bounces that result from the skids on the grass.

With this, we come to the end of his training routine. Now you know why Rafa is a machine on the tennis court.

Do you think Rafael Nadal training routine has any flaws?