Arsenal have completed the signing of Granit Xhaka from Bundesliga side Borussia Monchengladbach.

Although the move is yet to be confirmed by either of the clubs or the player but it has been, for some time now, one of the worst kept secrets in the transfer market. After a series of photo leaks on twitter, Xhaka was seen featuring the all new Arsenal kit for the 2016/17 season as well. 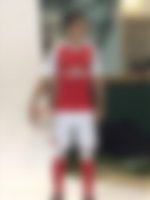 After weeks of negotiations between the two clubs, it was revealed last week that the Switzerland midfielder had agreed personal terms with the Gunners. Finally, the deal has succeeded, with the transfer fee reported to be in the region of €33 million plus add-ons.

The 23-year-old midfielder has signed a contract that will see him play at the Emirates Stadium for the next four years. Xhaka is the first major signing in this transfer window for the North-London club. Arsene Wenger, who was heavily criticized for his failure to buy even a single outfield player last summer, has made it clear with this move, that he aims to complete majority of his transfer business before the club travel to the United States for their two preseason games.

Xhaka was on Wenger’s radar since a long time as a potential replacement in the center of the field due to the imminent departures Mikel Arteta, Mathieu Flamini and Tomas Rosicky, whose contracts expire at the end of this season.