FC Barcelona met Alaves this Saturday at Camp Nou. Luis Enrique’s side was looking forward to an easy win ahead of their match against the newly promoted Alaves. From the beginning
of the match, Barcelona looked to dominate the match. However as the match progressed, one of the most major upsets of the season would unravel.

Let’s look at the talking points at this weekend’s fixture.

The Starting Line Up

Jasper Cillessen found himself making his debut for his new team. After Marc Andre Ter Stegen was injured. it was upto him to step into action. Luis Suarez and Andre Iniesta were rested ahead of their UEFA Champions League fixture this mid-week. Lionel Messi was also rested as he picked up a hamstring injury ealier this week. Neymar made his return after the international break. Luis Enrique showed his faith in Paco Alcacer by giving him a start in a La Liga fixture. Many changes in the starting 11 were made and Catalans were looking forward to a dominant display on their home turf.

The Shocker From Alaves 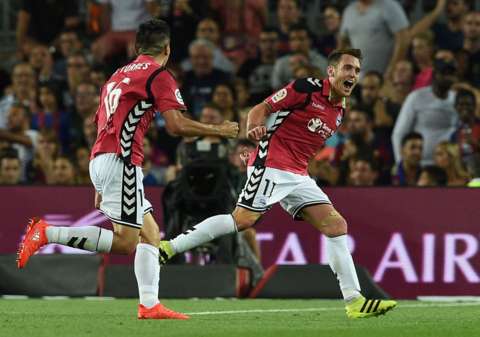 After displaying a firm 5 man defense throughout the first half, the visitors put themselves ahead with a good goal. The goal came as a result of a brilliant run from Kiko down the right flank. The cross came as a result of winning possession from the Catalans. Deyverson made sure he was there when the flying ball came for him. He met the cross and put the visitors ahead and silenced the whole Camp Nou. Not many would argue that after such a dominant defensive display, the newly promoted side would definitely grab every opportunity they find in Camp Nou. It was 0-1 to everyone’s shock in Camp Nou.

All Foot on The Gas

The hosts hardly wasted any time to put things in their place. Luis Enrique’s men found made sure they were on level terms as soon as possible. On 46′ mark, Jeremy Mathieu put FCB on level terms. The corner taken by Neymar found Mathieu and he made the score all square. Very soon after the equaliser, Barcelona brought Messi and Iniesta on the pitch to pitch up their game. The only change that fact made was how Alavas put another ball back in the net. Ibai Gomez was the scorer of a goal which many would argue should’ve been ruled as offside. However, Luis Suarez was further brought on to amplify their attack and give them some shot at redemption.

The team made their manager proud by thier defenseive display. Sice the whistle blew, Alaves made sure none of the Barcelona players found their own space to work up their magic. The stubbornness in their display was inspirational. For a team that just got promoted, they surely did better then the Champions on the given day. Their defense performed with utter most discipline. It was all hands on the go as the Pacheco had little to do. The team that had scored only 1 goal in their last 2 games, had somehow managed to score 2 on their visit to Camp Nou. Smart clearances, defensive tackles and keeping the ball in opposition’s half, it was as if they had a fool-proof plan against this Barca side.

The last 10 minutes of the game were pretty obvious for everyone. Luis Enrique had thrown all of his guns in the arena. Suarez, Messi and Neymar were getting frustrated as the trio that took the world by storm, couldn’t penetrate this defense. With weary shots coming from Andres Iniesta and few moments of utter individual brilliance by Neymar, the whole stadium was sinking and beginning to realize what they might witness. From launching it into the stands, there was nothing more the Barca players could accomplish. The last miss off the game came from Lionel Messi.

Alaves remain undefeated. After one of the biggest upsets of the season, Barcelona dropped points at home against an opposition they were sure they would pick up a victory. As it stands, they have a lot to learn from this defeat and we at Essentially Sports look forward to keeping you guys updated with it.