Coming to the end of the season, the Barcelona fan base got to see their number one transfer target, the dazzling French midfielder Paul Pogba up close for the first time when they played the Italian Serie A champions Juventus in Berlin for the Champions League Final. At 22, Paul Pogba is easily one of the best young players in the world at the moment and is one of the top transfer targets for Barcelona as repeatedly admitted by the club’s President and its International Sporting Director. Although, Barcelona are currently facing a transfer ban which will last for another 6 months, they can still purchase players but won’t be able to register them with the club till January meaning the bought players won’t be able to play for the club until January , 2016.

Now, assessing the current midfield of FC Barcelona- Ivan Rakitic seems to have fit perfectly in the squad as the hard working and vibrant midfielder has been one of the engines of the revamped Barcelona attack. The partnership between him, Sergio Busquets and Andres Iniesta has created a near perfect trio in the midfield that has evolved the Tiki-Taka to an even more lethal force which mixes the possession based game of Johann Cruyff with the counter-attacking style of Jose Mourinho.

So the question arises – Does the current Barcelona squad really need the services of Paul Pogba? At least four reasons can be cited as to why they the answer to this question is a big “NO”.

1. Why alter the winning combination?

Altering the winning combination is never advisable especially when you’re talking about the chemistry of a team that overcame serious internal troubles to win a historical double treble – a feat that no other team has achieved in the history of football. No team sheds out an amount of 100 million Euros on a player to keep him on the bench. The inclusion of Paul Pogba into the team would result in moving one of the three current midfielders to the bench. Given the performance of the current midfielders, none of them deserves to be benched, unless there are injury issues.

If there is one thing this Barcelona team have, it is perfect equilibrium, harmony and balance. Why even consider upsetting that?

2. The distinctness in the style of play.

Paul Pogba is an aggressive, rampaging midfielder. His style of play is reminiscent of former France international Patrick Vieira and the current Ivory Coast midfielder Yaya Toure who was a part of FCB’s squad back in the Pep Guardiola’s days. Barcelona let Toure leave to promote Busquets into the defensive midfield role, a decision that has worked wonders for the club as Busquets is considered to be one of the very best in that position in world football at the moment and has been a crucial member in Barcelona’s and the Spanish national team’s success in the recent times.

Tiki Taka is still at the heart of the current attack. Quick defence splitting passes have led to a stack of beautiful goals scored by Barcelona this season, the pick of which being the Ivan Rakitic goal in the Champions League Final where all 10 outfield players touched the ball before the Croatian buried it into the net, and also the Neymar goal in the Copa del Rey Final. While Paul Pogba does possesses great dribbling skills and his long shots are brilliant, it’s the tempo setting quality of the Barcelona game that Pogba seems to lack. 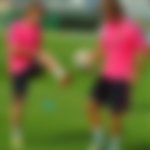 Barcelona has an abundance of talent in their B team squad as their world renowned academy “La Masia’ has consistently produced some of the world’s best footballers over the past few decades. The likes of Lionel Messi, Xavi Hernandez and Andres Iniesta, are all La Masia graduates. Given Barca B’s demotion to the Segunda B division (3rd tier), some of their players need to be promoted to the first team as they are too good to play in the non-competitive and violent Segunda B division. Barcelona have players like Sergi Samper, Allen Halilovic in their B squad who possess the talent to shine at the top level while they also hold the option to call back Denis Suarez from his loan spell at Sevilla. Adding to it is the 21 year old Rafinha Alacantra, who is already a member of their first team squad. The Brazilian International was recalled from his loan spell at Celta Vigo by Luis Enrique after winning the La Liga breakthrough player award in 2014 and has been rewarded with quality game time since then.

4. Availability of other “cheaper” players

If the Barcelona board is adamant on bringing a star name into the team, then there are other players out there that can be brought at a much lower price. German international Ilkay Gundogan’s contract expires in 2016 and there is a high possibility of Dortmund selling him this year as this would prevent him from leaving for free the next season. The player’s style resembles that of Xavi Hernandez’s as his passing skills are exquisite with a command in the possession based play.

Barcelona can also enquire about the possibility of signing Marco Verratti from PSG. The player has world class skills in bossing the midfield as was evident by the show he put up against Barca in the Champions League encounter. And considering the fact that the Italian is a big fan of Barca No. 10, Lionel Messi, the Board can use the incentive of sharing the locker room with the 4 time Ballon d’or holder, in luring him away from Parc des Princes.

Then also have the option of going for the versatile Inter Milan midfielder Mateo Kovacic. At just age 21, Kovacic has shown himself to be one of the shining lights in a struggling Inter team and is also a regular for his country having made his Croatia debut in March 2013.  Rumours of Liverpool agreeing a deal with Inter for Kovacic for a fees of 16.4 million pounds have been going on, although the player himself has come out to dismiss any such rumour. If Barca do really go for him, Liverpool will be kicked out of the race given the brand and the financial superiority of the treble winning club.

Barcelona should avoid making this transfer a muscle flexing exercise of keeping him from the clutches of other European giants and should rather prefer to stick to the winning combination Luis Enrique has created in his first season at the club. May be in future, when the player matures and his price tag turns reasonable, they can let Paul Pogba wear the Blaugrana colors.