The Ball brothers have been all the rage in the NBA for a while now. Be it LiAngelo Ball or LaMelo Ball or Lonzo Ball, the trio have constantly been in the headlines. While the trio have been well known since their high school days, the trios popularity exponentially increased in 2017 when Lonzo was drafted to the Lakers.

Lonzo certainly had a slow start to his career, but ever in the seasons to come, Ball has become one of the most exciting guards in the league. Be it his incredible vision or his ability to pass the ball courtesy of his shooting, Ball has become a great pickup for the Bulls. 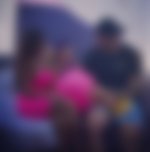 Given his popularity on and off the court, it is safe to say that Lonzo has a crazy female fandom. But it seems like Ball has been a one-girl man so far with long-time school sweetheart Denise Garcia.

Denise Reann Garcia is an Instagram influencer. Hailing from the West Covina, a suburb of Los Angeles, Denise was a sporting star in Chino Hills. Her rise to popularity coincided with the fame Lonzo Ball was getting at the time.

A college soccer star, Garcia met with Ball when he was just a freshman. Ever since then, it was a start of a special bond. “Without knowing his name or watching him play, all I cared about was that fact that he caught my eye and had my attention.”

Although their relationship had its bumps, the pair eventually stuck around and in 2018 the couple saw the birth of their daughter Zoey Christina Ball. Zo certainly loves to spend time with his daughter, often flooding his social media with videos of them fooling around.

While Zo became an NBA star, Garcia’s popularity also sky-rocketed. As of October 2021, the former colligate soccer star has around 450,000 followers in Instagram. But the duo’s social media isn’t as studded with photos of each other rather features their daughter.

Are Lonzo Ball and Denise still together?

While Lonzo and Denise might have started off their relationship a long time ago, the duo have had their fair share of controversies. Be it them splitting up and patching up for their child, the duo have an on and off relation.

But 2018 certainly seemed like the last straw in the duo’s relationship, as Garcia mentioned that the couple were only ‘parents’. In an episode of the ever popular ‘Ball in the Family’ show, the model said, “I mean, I just want us to both to be happy, whatever that means.”

The Denise-Ball history certainly repeated itself, as the two confirmed their reunion in 2020. Speaking up close and personal, Lonzo and Denise despite their differences, back in 2020, Denise spoke about the pair maturing.

“I think we’ve both grown and I think we’ve learned from our mistakes and no matter has happened between us, like no matter how ugly it gets, like we always find a way back together.”

The two have also been spotted together in 2021 and for now everything looks smooth sailing. It is great to see the school sweethearts stick around with each other and hopefully their relationship goes places.

The relationship of Denise Garcia and Lonzo Ball has certainly been in the headlines for a while now. While Ball is on his way to build a good career in the NBA, Denise has built her social media empire.

A fitness influencer, Garcia has many followers and also posts cute posts with her daughter. Although information of her net worth is pretty limited, according to 24Celebs.com, the model is worth about $1.000,000.