Many regard LeBron James as the greatest NBA player of all time. Since his debut in 2003, he has either broken or been chasing a major NBA record. However, the four-time NBA champion’s journey to success hasn’t been easy.

Many assume that professional NBA players are living the dream. Indeed, they are, but not everyone’s journey to the NBA has been a walk in the park. King James’ childhood wasn’t easy, as he didn’t even have a permanent home.

LeBron and his mother Gloria had to change their apartments from time to time in Akron, Ohio. However, when LeBron’s coach at that time, Frank Walker, came to know about this, he offered LeBron a home.

Frank Walker offered LeBron to stay with him. It was Frank who introduced the game of basketball to a nine-year-old LeBron James.

“My life changed. I had shelter and food,” LeBron explained in an old interview.

“I’ll never forget what the Walkers did for me, especially Frank. He doesn’t get the recognition he deserves because he’s real quiet, but he was the first one to give me a basketball and the first one to show a real interest.”

Frank Walker’s family was very respected in the neighborhood and they just wanted to provide for LeBron. Frank used to work for the Akron House Authority at that time. Young LeBron used to spend the weekends with his mother and the rest of the week with the Walkers.

“LeBron has the knack of fitting in anywhere,” said Frank Walker in an old interview.

“He liked the routine of our house. He learns things quick.”

All thanks to the Walkers, who helped LeBron in getting a normal childhood in Akron. Frank Walker stepped up when LeBron needed it. LeBron started playing organized basketball in his fifth grade. He had an equal interest in football but later dropped the idea of becoming a footballer. 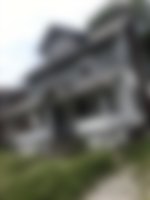 When LeBron reached the sixth grade in school, the Walkers helped Gloria, LeBron’s mother, find her own apartment. After that, LeBron moved back to his mother. However, he was still very close to the Walkers.

He used to stay with his mother on weekdays and on weekends, he would stay with the Walkers. James and his mother continue to have a close relationship with Frank and Pam Walker.

Now, it’s safe to say that LeBron made good of the opportunity he got from the Walkers. Since then, James has developed into one of the best and richest athletes in the world. But he hasn’t forgotten the Walkers and still has massive respect for them. Troubled childhood wasn’t the end of LeBron’s story. It was just the beginning.

WATCH THIS STORY: A Tour Inside LeBron James $23 Million Gigantic Mansion in LA