Ben Askren vs. Jake Paul: What Weight Class Are They Fighting?

The vicious battle between Jake Paul and Ben Askren is inching closer with time. After much rigmarole and trash talks, the pair will finally settle their beef inside the ring on April 17.

Fans have awaited this contest ever since the duo engaged in a feud with each other. Now, with only a few days left for this fight, the excitement among everyone has only increased. But what weight class will both of them fight each other out?

As per BoxRec, Askren and Paul will contend with each other at the latter’s favorable weight class, the cruiserweight.

That said, both of them will have to weigh in and around 200 lbs/90 kgs to be able to get their hands on each other.

In his last fight, the ‘Problem Child’ made a comfortable 189 lbs to battle out the former NBA star Nate Robinson. It won’t be tough for Paul to make weight this time, too.

But on the other side, Ben Askren will have to push himself harder than ever to make weight. In his extensive MMA career, Askren has fought predominantly in the welterweight category.

And this will be the first time when he’ll have to put on such an excessive amount of weight.

Furthermore, Jake Paul carries immense power and reach with his current frame, and this might not go well for ‘Funky’. Yet, this bout promises to be an absolute blinder, and fans cannot wait to see the duo take up ring space.

Jake Paul vs Ben Askren – will it stay true to the hype?

Ever since this fight got announced, it has turned into a hot topic in the entire fight world. Both Paul and Askren have painted wild verbal shots at each other, and now they’re keen to settle these scores inside the squared circle. 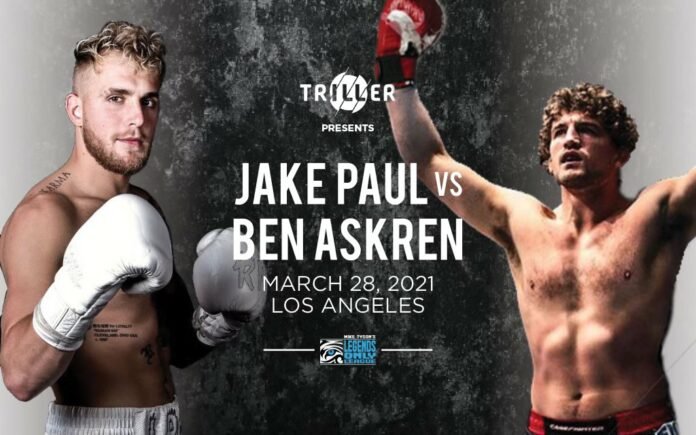 This fight plays a significant role in Paul’s career, as this will be the first time when he’ll touch gloves with a noteworthy contender from combat sport.

Whereas it will be a mammoth test for Ben Askren too, who has remained an elite grappler in his MMA career. He’ll lace up the boxing gloves for the very first time professionally.

That said, it’ll be interesting to see who comes out on top in this fight.

Who will you be rooting for among the two?