The news of an all-brit unification bout has been circling after reports emerged that promoters are working on a deal between Tyson Fury and Antony Joshua. However, the rumors appear too good to be true, with both Deontay Wilder and Kubrat Pulev unwilling to step aside.

Sources revealed that talks had initiated between the two promoters, to set up a colossal showdown . Tyson Fury and Anthony Joshua share the major heavyweight titles between them, with this high stakes match-up undoubtedly the biggest the heavyweight division has witnessed. 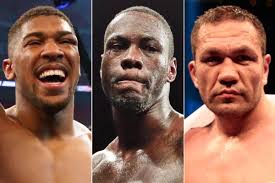 READ : “We can’t do Fury and Wilder without an audience “- Bob Arum Reveals Timeline For Fury vs Wilder 3

Apparently, MTK global has been in talks with Eddie Hearn to set up a bout in Saudi Arabia or elsewhere in the Middleeast, with both fighters eager for the unification bout. However, despite the talks, a fight between the two is unlikely to happen anytime soon for several reasons.

The major reason is obviously the ongoing coronavirus pandemic. The virus has put a stop to daily life and major sporting events for the foreseeable future. Moreover, with  audiences banned from events, promotions could suffer losses  if they do go ahead with the fight.

Another major roadblock is the fact that both fighters have deals locked in for their next fight. Fury is set to face Deontay Wilder for the trilogy bout, with Wilder making it clear he won’t be stepping aside. Similarly, Anthony Joshua is set to face Kubrat Pulev.

Also, promoters will find it impossible to find a venue, with both Bob Arum and Eddie Hearn adamant on having an audience for the fight should It take place. Taking all these factors into consideration, it’s unlikely an all-Brit unification bout will happen any time soon.

What are your opinions on the step-aside deals? Let us know in the comments below!