“Deontay Wilder is Out,He’s Done”-Eddie Hearn Fires Back at The Bronze Bomber

Boxing Promoter Eddie Hearn revealed that Deontay Wilder will not be offered any deal if he loses to Tyson Fury.there were reports suggesting that, Wilder might accept a step-aside deal, with several terms and conditions. His deal included $10 million and a chance to face the winner of Joshua vs Fury. However, Hearn has shut down rumors of this happening.

‘We also don’t want to enter into a deal where we say, “Oh when we beat Tyson Fury, we have to face Deontay Wilder and he has to get 40%”. Deontay Wilder is out. He’s done” said Hearn to IFLTV

After Fury’s dominant performance against Wilder in the rematch, talks of an all-brit unification bout have been floating around. Tyson Fury and Anthony Joshua hold all the heavyweight belts between them. The prospect of an all-brit unification bout will certainly be a huge fight in terms of numbers. Hearn confirmed that various countries had approached him to set up a fight between the two. 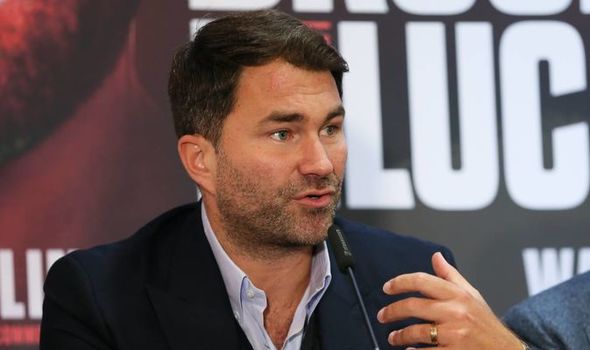 “I think Bob Arum said in an interview at the weekend where he said he doesn’t know where this number [$10million] has come from, He’s said in interviews he won’t step aside and with everything happening in terms of the uncertainty over the future of the world, let alone boxing, he’s not going to want to step aside”. Said Hearn to IFLTV

Tyson Fury will face Deontay Wilder in the trilogy bout, with Hearn unlikely to offer Wilder a deal under these conditions

He’s just a voluntary challenger. We want a clean slate when we enter into a deal. Whether it’s a one-fight deal with Tyson or a two-fight deal but when AJ beats Tyson Fury we don’t want an obligation to fight Deontay Wilder. What’s he got to do with it? Said Hearn

Given that both fighters have their opponents locked in, a likely timeline for the unification bout might be early next year.

What are your thoughts on Hearn’s comments? Let us know in the comments below!