Former World Strongest Man and Game of Thrones star, Hafthor Bjornsson, has made a bold claim about his boxing. The ‘Mountain’ as he’s commonly known, has welcomed a fight against the current heavyweight champion, ‘The Gypsy King’ Tyson Fury.

Bjornsson has shifted his focus from strongman to boxing ahead of his high-profile bout with British strongman, Eddie Hall. However, once he settles his long-standing rivalry with Hall, he wants another Britisher for his next fight.

Speaking to the Metro, Bjornsson revealed his desires. He said that the plan is to knock out Hall and attract the attention of the boxing world. ‘Thor’ claims that if he can knockout the Brit twice, some heavyweight will be up for the challenge to knock him out. 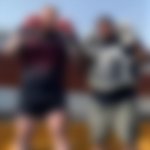 However, the famous TV star always wants the best. He said, “No one has seen a guy my size before and imagine if some big name would challenge me because they want to shut me down. That would be a huge opportunity for me and I probably wouldn’t turn it down.”

The Strongman then added, “When I do anything, I always look at the top and the top right now is Tyson Fury obviously, but we’ll see in two years’ time who is on top then.”

Will we ever see a fight between Tyson Fury and Hafthor Bjornsson?

Fury is amidst one of the biggest fights in heavyweight history; the ‘Mountain’ has just started boxing. Moreover, he will fight Hall in September and then engage in a re-match, probably in 2022. So would it be possible for him to face Tyson Fury?

We know Tyson Fury as the fighter who accepts any challenge thrown at him. However, with the heavyweight division being one of the most exciting at the moment, ‘The Gypsy King’ has his hands full. Moreover, as of now, he is not likely to accept exhibitions or fights that don’t make sense.

Maybe when he retires, if ‘Thor’ is still in boxing, he would consider taking on the super-star. Although, given the vast differences in weight and ability, it would be a stretch to imagine the two in the ring.

However, stranger things have happened in the sport, especially in recent months. Therefore, it would be no surprise if he saw Tyson Fury in the ring with Hafthor Bjornsson.

What do you make of this news? Do you think Tyson Fury would entertain a fight against Hafthor Bjornsson?