New unified lightweight champion Teofimo Lopez Jr. has ‘taken over’ the entire division as he recently beat the great Vasyl Lomachenko to become the first men to get hold of all the four world titles.

The 23-year-old is the new king of the division, with several alluring challenges ahead. However, we might not see him fight in the lightweight unit soon. After grabbing all the world titles, Lopez’s father claimed that they are planning to shift from 135 lb to 140lb, eyeing to unify the super lightweight division too.

Although Lopez has desired to square off against several lightweight champions in Gervonta Davis, Devin Haney, and others, his father believes that they are not worthy enough. Thus, Lopez Sr. bills the move to 140 lbs as the most suitable one at this point.

Teofimo Lopez Jr. is ready to roll in the 140 lb division

Just like the lightweight roster, the super lightweight unit is also filled with several top-rated boxers. Jose Ramirez is the WBO and WBC champion of the division. Meanwhile, Josh Taylor holds the IBF and WBA titles. Thus, Lopez would have to go through these men to become the unified champion of 140 lb roster.

During an interaction on Sirius XM Boxing, Lopez Sr. prompted the idea and said, “We don’t need to do anything at 135 no more, we unified the titles. That’s it, that’s all we want. You know Devin Haney hasn’t won anything to prove himself.”

He added, “You know, we don’t need to take nobody’s belt, we already unified the weight division. We are moving to 140 and unifying the 140-weight division.” 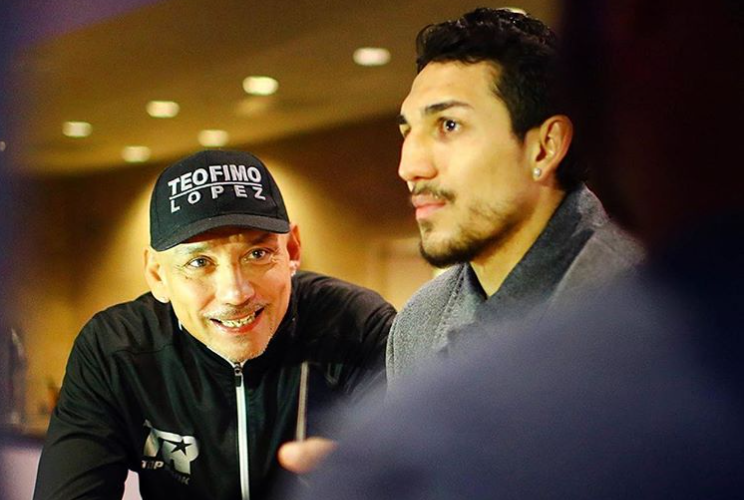 As per Lopez Sr., no one in the lightweight roster brings them any challenge. Talking about elites like Lomachenko and Gervonta Davis, the veteran coach said:

“The man to beat was [Vasyl] Lomachenko, and I had told everybody before we won. Lomachenko would have never gave us ever, Lomachenko was never gonna give us a rematch. What has that guy (Gervonta Davis) has done?”

That said, fight fans can expect Lopez Jr. into a new mix ahead. Yet, it is early to say so because the lightweight roster is still to come up with new conclusions with several matchups ahead.