In today’s main event, unified light-welterweight champion Josh Taylor took on challenger Apinun Khongsong. The bout was a 12-round affair for Taylor’s WBA (Super), IBF, and The Ring titles.

In the end, Josh Taylor won the bout via first-round knockout. 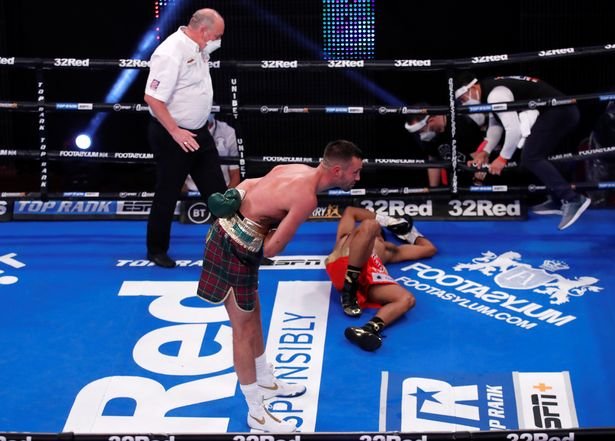 Taylor, in one of the exchanges, hit Khongsong with a body shot which led to him collapsing to the canvas, putting an end to the bout.

The left uppercut to the body closes the show 🏴󠁧󠁢󠁳󠁣󠁴󠁿

After the bout, Taylor made his intention to face Jose Ramirez for the title unification bout very clear.

Talking about the unified WBC and WBO light-welterweight champion Jose Ramirez, Taylor said, “I think, against Postol it wasn’t a very good performance at all. I do feel I can perform better than that given the circumstances.

“But again, I wasn’t impressed from what I’ve seen from him. I want that fight, I want that fight now. I believe I’ll whoop his a**, all day long. I just believe I’ve got the beating of him. I’ve never seen anything from him that I haven’t seen before. So why not, we’ll face as soon as possible.”

Josh Taylor only has one fight on his mind and that's Jose Ramirez 😤#RoadToUndisputed 👑👑👑👑 pic.twitter.com/A0YfieJ2mR

What do we take away from the Josh Taylor vs Apinun Khongsong main-event?

This fight was a big step up for Khongsong. Many believed the pressure of performing under the bright lights would get to him. And despite this being his first chance on the big stage, he couldn’t make the most of it.

Just watched the Taylor Ko back on the tv.
Watched it live on my phone earlier & switched it off after it was waved off.
Decent little shot but shocking the amount of time the fella stayed on the floor!
But the way he gets out of the ring?!😂🙈
#TaylorKhongsong

With this bout in the books, Taylor’s plan to make a step-up in terms of the competition is definitely the right move. If he wants to appeal to the international audience, going for the big title fights is the right decision.

Damn for a second I thought that Josh Taylor fight was a fix. Nice body shot.

And it’s all over! Josh Taylor scores a first-round KO with a vicious body shot. Wow #TaylorKhongsong

A very poor opponent. Lewis Ritson is of course the lineal champion at 140 after his win over Robbie Davis Jnr. Even if Josh Taylor beats Ramirez to become the undisputed champion he needs to face Lewis to be seen as the main man in the division. pic.twitter.com/qJnMEbyndj