September 17, 2011, was the day when one of the most bizarre things happened in the ring. It shook up the world of boxing and divided the fans in two. In a fight with Victor Ortiz, Floyd Mayweather hit the former with two punches that created a lot of controversy.

In a fight that was billed as “Star Power”, the two squared-up for Ortiz’s WBC welterweight title. Floyd Mayweather as usual took control of the fight from the beginning. He made Ortiz miss and landed counters of his own. It was all Mayweather till the fourth round.

In the fourth, however, Ortiz started to pick up. He found some success with shots and was hitting Mayweather often. On one such occasion, Ortiz landed a solid punch that hurt Mayweather and made him back up on the corner ropes. He followed up with a flurry of punches. Although Floyd used his guard and head movement to avoid most of the punches, Ortiz, in a moment of utter excitement, hit him with a jumping headbutt. 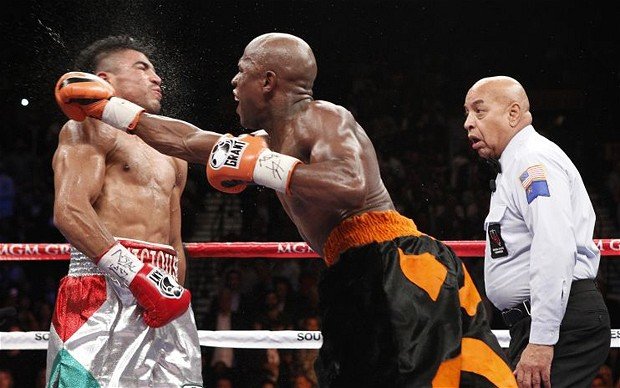 This caused the referee to separate the two and temporarily stop the bout. He then deducted one point from Ortiz for the foul. During the brief pause, Ortiz went to hug Mayweather as an apology and shook his hand too.

However, after the bout resumed, Ortiz went to hug Mayweather for the third time. He responded by hitting with Ortiz with two hard shots, sending him crashing down to the canvas. As the boxing world gasped, and the referee started the count. Ortiz could not get up on time, and thus Mayweather was declared the winner by knockout.

Reactions to the bout and Floyd Mayweather’s post-fight interview

This incident set the boxing world on fire with a lot of heat coming towards Mayweather for his unsportsmanlike conduct. Many called it a “cheap-shot” and a “disgrace to boxing.”

Others came to Floyd’s support, saying the two had already shaken hands, and the referee had continued the bout. They said it was Ortiz’s fault for not protecting himself and also blamed Ortiz’s headbutt that instigated the whole turn of events.

In the post-fight interview with commentator Larry Merchant, Mayweather didn’t feel any guilt and felt he did the right thing. Later, the two got into a heated argument, as Floyd believed Merchant was biased against him and didn’t acknowledge his victory.

Frustrated with his questions Floyd said, “You know what I’m gonna do, cause you’ll never give me a fair shake, you know that. So I’m a go and let you talk to Victor Ortiz, all right. I’m through, they put somebody else up to get me interviewed…You never gave me a fair shake, HBO need to fire you, you don’t know s*** about boxing. You ain’t s***. You’re not s***.”

Replying to this rant, Merchant said, “I wish I was 50 years younger, and I’d kick your ass!”

Larry Merchant's unforgettable interview with Floyd Mayweather was on this date in 2011.

"I wish I was 50 years younger and I'd kick your ass!" pic.twitter.com/ojXxoSNxWD

Although Merchant then played it off smiling and switched to Ortiz for the interview, the event was something that will always remain as one of the most infamous moments in boxing history.