Born in 1992, Caleb Plant grew up in a small town called Ashland City in Tennessee. Right from the get-go, his parents embedded the ‘Sweethands’ element in his personality. He grew up around the typical gym environment as his father, Richie Plant, is also a professional kickboxer.

Despite being molded in that kind of environment, Caleb Plant had to work odd jobs to help his family. He even faced a lot of adversity in the early years of his life, as he had to force himself to work relentlessly to support his mother, who reportedly battled substance abuse and dependency problems.

Growing up in a two-bedroom trailer, Plant and his sister did not enjoy the riches of life. But, things are different now. Today, he can be seen driving to the gym and then back home in Las Vegas in a 1964 Chevy Impala convertible.

Plant has literally worked for every single penny he has ever earned throughout his career. He caught the world’s attention with a stunning win over Jose Uzcategui in 2019. As he became the IBF titleholder with that huge victory, he came into Canelo Alvarez‘s radar.

The IBF titlist has had several twists, turns, ups, and downs in his career and everyday life. However, there is one who always has his back through thick and thin – his wife.

Who is Caleb plant married to?

Caleb Plant has been through a lot in the past; however, ever since his wife entered his life, he is a much happier man. He is happily married to Jordan Hardy. By profession, Caleb Plant’s wife is a Fox broadcaster and a respected boxing reporter. Hardy’s also an athlete, she competed in 100-meter hurdles. 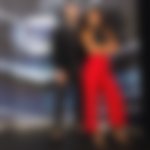 In February 2019, Caleb Plant proposed to Jordan Hardy after winning the IBF super-middleweight title against Jose Uzcategui. They later married in November 2019 in a private closed-off wedding ceremony. Today, Jordan helps Caleb Plant through everything- from training to nutrition to just looking out for him.

Does Caleb Plant have kids?

Before Caleb Plant met Jordan Hardy in 2016, the IBF champion was with a woman named Carman Jean Briscoe-Lee. With her, he had his daughter, Alia Plant, who was born on 7 May 2013. This would go on to change Caleb Plant’s life forever.

Unfortunately, the infant suffered from a brain abnormality and got pestered by seizures, which occurred hundreds of times a few days. Alia Plant even had respiratory problems which worsened her illness.

His daughter barely lived for 19 months with some serious illness throughout her lifespan. She spent most of her life in and out of the hospital, and Plant couldn’t really enjoy and do what he dreamed of before becoming a father.

Caleb Plant has now dedicated his life to achieving new heights in the sport. Even after the Uzcategui win, he said that he had to overcome the death of his daughter in the process of becoming a champion.

“I’ve worked my whole entire life for this, 17 years straight. I buried my daughter in the process of trying to get this belt. I promised her that I’d become a world champion and that I’d bring her this title, and that’s exactly what I’m gonna go back to Tennessee and do,” said Caleb Plant after defeating Jose Uzcategui.

Plant’s wife, Jordan, understands where her husband is coming from. She knows the ways in which Caleb Plant works and operates. Clearly, Jordan Plant always has his back.

“I knew that in order to have a relationship go well, I’d have to understand what he’d been through. It let me know that he needed more love than I would need, because I grew up with all that love and affection, and he didn’t,” said Jordan Plant.