Anything is possible in your dreams. Even a fight between heavyweight boxer Tyson Fury and UFC welterweight/lightweight Conor McGregor.

Considering the star power of both fighters, there’s no denying that it will draw a significant amount of PPV numbers. However, the matchup is absolutely bizarre in real life and there are no chances of its fruition in reality. That said, American boxer Regis Prograis has already dreamed of the fight and came up with some surprising conclusions. 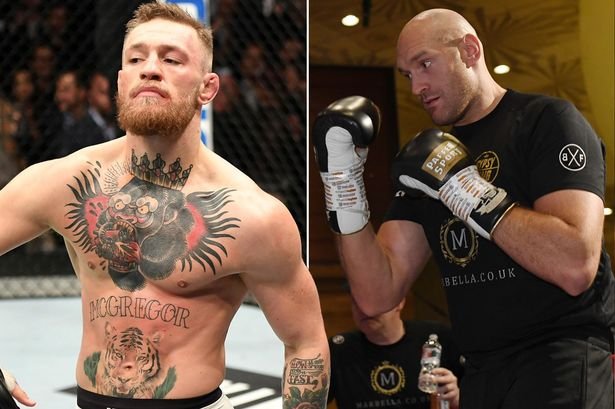 To be specific, Prograis has recently seen the matchup happening while he was asleep. No wonder it was a hilarious experience as the boxing sensation revealed the entire incident on social media, sending the fight fans to a frenzy.

Conor McGregor vs Tyson Fury: A fight that should not happen

Regis Prograis turned to Twitter and stated that he dreamed about Conor McGregor vs Tyson Fury.

As per the ‘American dream,’ McGregor was allowed to pull off two MMA moves at his own will in the matchup. While fans wanted him to explain more about the incident, Prograis straight away jumped to round number five.

Describing the contest further, Prograis wrote that ‘The Gypsy King’ was hitting McGregor and also put him in a choke. While things were slowly turning intense, Prograis claimed that he woke up from his sleep.

“I just dreamt that [Conor McGregor] and Tyson Fury fought in a boxing match where [McGregor] was allowed 2 MMA moves whenever he wanted. Fast forward to the 5th round Tyson Fury was hitting Conor a lot and he put him in a [chokehold] then the bell [rang] ending the round. Then I woke up,” Prograis wrote on his Twitter.

I just dreamt that Conor Mcgregor and Tyson Fury fought in a boxing match where Mcgregor was allowed 2 MMA moves whenever he wanted. Fast forward to the 5th round Tyson Fury was hitting Conor a lot and he put him in a choke hold then the bell rung ending the round. Then I woke up

Talking about the incident, McGregor and Fury have a lot in common. Not as rivals, but as two of the biggest superstars of modern-day combat sports. A few months back, Fury also hinted at his MMA move, citing the ‘Notorious’ as his preferable training partner.

Now, McGregor is eyeing another boxing move against Manny Pacquiao in the Middle East soon. Fury, on the other hand, is obligated to defend his newly won WBC heavyweight championship against Deontay Wilder. So unless you are dreaming, this fight is not happening.

If you still want to see these two compete, check out McGregor vs Fury in EA Sports UFC 4 below.