“That’s Crazy”: Kevin Durant Responds to LeBron James Being Called as the GOAT

The Call Of Duty Modern Warfare and Warzone Season 5 is underway. It brought some amazing additions to the game with new multiplayer maps in Modern Warfare, a loot-filled train in Warzone and even opened up the Stadium. That is not all. Players have also seen a lot of cryptic messages pointing towards the next Call Of Duty title. The messages show up in Russian and English and this may confirm that we might have a reveal in Verdansk.

The Bare Bones Moshpit is an interesting addition to the mix of Multiplayer modes available. The official Activision blog describes it as “Bare Bones strips away any of the add-ons and leaves you with signature Call of Duty combat in its purest form. No Killstreaks, no Field Upgrades, and no perks – just an Operator and their weapon. Choose your armaments wisely in this game mode mosh pit and rely on strategy, tactics, and gunplay to best your opponent”

A new ‘Poison Dart Blueprint’ is also available for the guns Galapagos and Anole. Take a look at it below 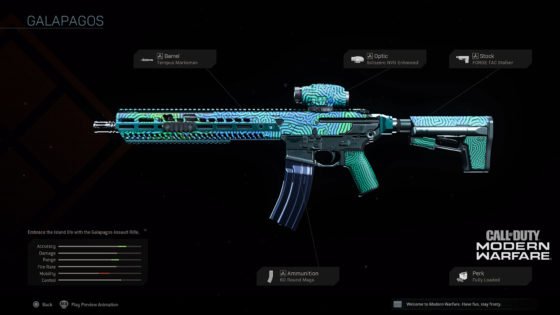 The new Mini-Royale mode will give you the feel of a Warzone match with intensity on steroids. You can also now play BR Solos Stimulus where you can redeploy when killed if you have a certain amount of money on you.

These additions are now live and you can go check them out. But, a lot of people have been seeing weird glitches since the game launched, and well, it’s really something to see. Take a look at this tweet by a player :

How tf is this still a thing a week after the bug was discovered?! pic.twitter.com/NlW3uYVukn

The funny part is, you can still use your weapon even if you have no idea how to aim. While Infinity Ward is struggling to keep hackers/cheaters at bay, there are loads of other issues they have to take care of. The big reveal for COD 2020 may be coming soon and they absolutely cannot afford to mess it up. Fix your game, guys!