When it comes to gaming personalities very few can hold a candle to Matthew “Nadeshot” Haag. Having started off at a very young age, Nadeshot has had a very eventful career, both as a content creator and a professional gamer. It all started off with Halo and Call of Duty, but as the years passed, Nadeshot became too big a personality for just a single gaming franchise.

Nadeshot really took to gaming when he was playing Halo 2, even making it as a competitive amateur. By the time he was 16 years of age, he had turned to Call of Duty 4: Modern Warfare and made it as a professional gamer.

Ironically, though, his first experience with the franchise was with Call of Duty 2, and he detested the game. “I absolutely hated it”, he would say a few years later.

Call of Duty or not, Nadehsot was simply bonkers about gaming, spending hours on end in front of the screen. At one point, his non-stop gaming compelled his mother to make Nadeshot take up a job at McDonald’s just so he would be away from the screen for a while. I think we can all relate to that.

Since he and his friends spent about 8-10 hours just playing CoD Multiplayer, they decided to try their hand at competition. They made a beeline for a platform called Gamebattles, where he was noticed by a gaming organization.

Impressed by his skills in Call of Duty 4: Modern Warfare, a gaming organization, Optic, approached Nadeshot. The CEO Hector ‘H3CZ’ Rodriguez offered Nadeshot a chance to build a competitive roster under Optic.

However, soon after their first competitive endeavor, the rest of the team voted on getting Nadeshot off the team. H3CZ, however, convinced Haag to stay with Optic as a content creator.

Now working as a content creator, Nadeshot had to find a balance between that, his school and his part-time job at McDonald’s. Not an easy thing to do for an adult, let alone a mere teenager. Yet, he did and thrived as a creator.

A little while later, H3CZ gave him another shot at the competitive spot when the roster had to replace a member, albeit temporarily. Impressed by his showing and attitude, Optic initiated a secondary competitive roster called Optic Nation.

However, content creation remained his strong suit. What set him apart from the rest was Nadeshot also gave his followers a glimpse into his life. Fans could relate to him, which endeared him to them. His popularity was growing and so was his following, which allowed him to quit his job at McDonald’s once and for all.

Call of Duty success and failure

In 2011, Nadeshot once again got a chance to represent Optic at Activision’s first big attempt at eSports with Call of Duty Modern Warfare 3. With Nade in the team, Optic managed to win the tournament.

The following years had Nadeshot in and out of the competitive roster for Optic, even helping them win a prestigious Call of Duty Black Ops 2 event. 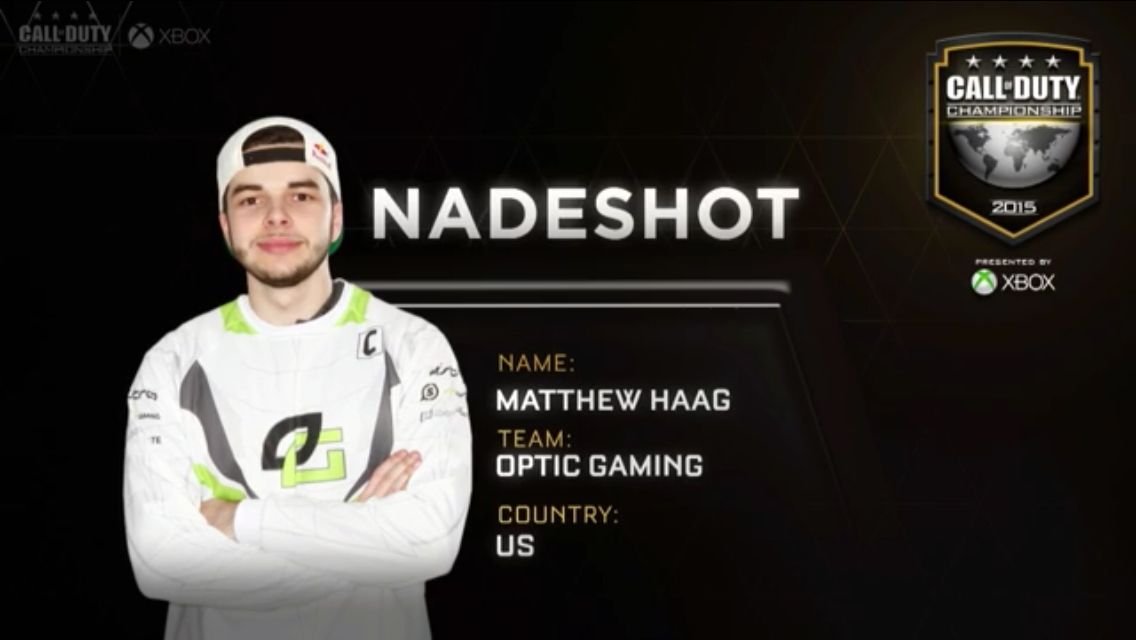 Nadeshot had the personality and the skillset to truly capture the attention of the gaming world.

After a roller-coaster couple of years on the competitive scene, Nadeshot made the decision to step down.

“I was playing to not lose, I wasn’t playing to win”, he said in his announcement video.

Understandably, he was tired of the negativity surrounding his role on the roster. He no longer wanted to be the scapegoat for the failures of the team.

He wanted to step down a lot sooner but was afraid that if he was no longer a part of Optic, his content would not be appreciated. But he took a leap of faith, and we all know what he achieved after that.

Not only did his popularity as a gamer keep growing, but he also co-founded a gaming organization called 100 Thieves. 100 Thieves remains one of the most influential and popular organizations in the industry to this day.

Now, he takes care of the various teams under the 100T banner, helping and mentoring the players.

Looking back at his career, it is absolutely amazing what he has achieved over the years. In his early days, he did something that nobody has truly managed even to this day- he maintained a balance between content creation and competitive gaming. For about 2-3 years he was an absolute delight playing both roles.

But what I admire about the man more than anything is how serene he was always been. He faced everything thrown at him with calm and composure; something we do not necessarily see in gamers today.

If you’re looking for an inspirational figure in the gaming industry, you need not go any further than Nadeshot.