The rise of battle-royale games has been meteoric and there is absolutely no stopping it. Players now have several more options to choose from, including PUBG, Fortnite, Apex Legends, Call Of Duty Warzone, and most recently, Hyper Scape. Every game has brought something different to the table with its combat, story, and mechanics. But one particular feature that has forever been the center of the debate is cross-platform play.

The games listed above are all playable on PC, Xbox, and PlayStation, but only some of these platforms have crossplay enabled. For instance, PUBG only allows crossplay for Xbox and PlayStation. PC players cannot play with console players in the game. On the other hand, Fortnite, Call Of Duty Warzone, and Hyper Scape have crossplay enabled across all platforms. Apex Legends is also set to get cross-platform play soon.

Each game has its own take on cross-play and how it affects the actual gameplay. Read on to know how Call Of Duty Warzone’s system works and if it should even have crossplay in the first place.

Controller vs Keyboard & Mouse: Which one is better?

The one debate that will never end is the one over the controller versus the keyboard & mouse. Each side comes with its own set of advantages. K&M players have more mobility while controller players have aim-assist to help them.

The counterpoint from fans here is that aim-assist has been absolutely overpowered. Controller players would argue that it levels the playing field against K&M players, who have more functionality and mobility at their disposal. But at the end of the day, this debate never ends.

When it comes to Call of Duty Warzone, players have forever complained about controller players being at an advantage. This is because all the guns in the game have very different recoil patterns. K&M players allege that with aim-assist, it is relatively easier for controller players to control the recoil.

On the other hand, there is the problem of cheaters in the game. The game has been forever plagued with cheaters and it is relatively easier for them to boot up the game on their PC. Both parties have problems but ultimately, is there a solution to this issue? Players do have the option of turning off crossplay in the settings, but it remains to be seen whether this is enough.

Nerfing the controller aim-assist has put PC players at an advantage but on the whole, keeping it as-is isn’t doing much good. This begs the question; would life have been if crossplay didn’t exist in Warzone at all? 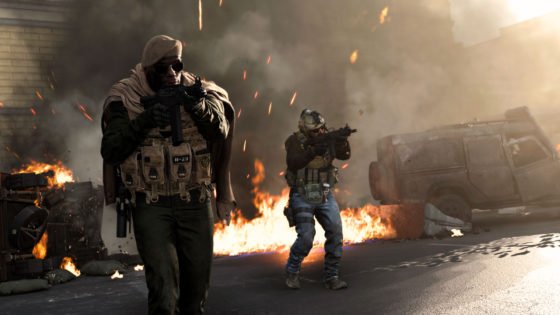 The gaming community certainly wants to play together on different platforms. However, when it comes to a competitive setting like Warzone, they have certain divided opinions over which the debate is never-ending.

This discussion makes one wonder if crossplay should even be an option at all. Disabling it would not only end the complaints and debates, but also will level the playing field for the players. It might make things less interesting on the whole, but at least the community would be at peace.