Call Of Duty Warzone introduced the Mk9 Bruen in the Season 3 Battle Pass. The weapon was a cross between an LMG and an AR. Not many people seemed to talk about it back in Season 3. In the gunsmith, the Bruen is capable of attaching a 60 round removable magazine or a 200 round unremovable one. It is a 5.56 round gun that provides excellent stability, in mid to long-range. Add a monolithic suppressor to it and the range is increased. 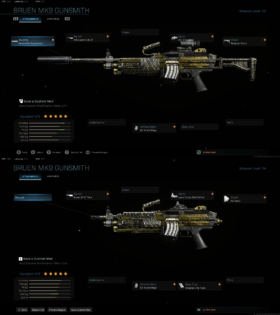 Furthermore, now the MK9 Bruen has an extremely annoying challenge to have it unlocked. Free to play players, who did not procure the Bruen from the Battle Pass previously, have to complete the challenge to unlock it. It involves killing 3 enemies near smoke, in 15 different matches. The sound of this is hectic, honestly. The other way of getting it is by purchasing its blueprint with COD points. So if you hate the grind, just pay the buck. Honestly, if you keep dying to the gun, you might as well have it yourself.

The meta is constantly shifting in Verdansk. The LMG took everyone by surprise in the Battle Royale. With the perfect loadout, it can have increased fire rate, faster ADS speeds, and spot-on accuracy. The Bruen has been melting enemies in Warzone in recent weeks and this is getting on some people’s nerves.

100 Thieves co-owner Nadeshot is one of them;

It is 10x worse than the Grau

The annoyance is understandable. The Bruen doesn’t take more than 10 rounds to down an enemy. Furthermore, this is more troublesome as the stability of the gun is just too high. The recoil control is a child’s game. Hence, players are now being ambushed by stationed gatekeepers, with a 200 round mag. Honestly, you stand no chance against a Bruen ambush. The sad part is that it takes literally no skill to master.

But looks like the prayers of the sufferers are going to be answered soon. A few hours ago, Ashton Williams, from Infinity Ward, provided an update that mentions ‘weapon tuning’;

We've got two patches in the works that'll fix a few bugs: One has weapon tuning, a fix for an exploit, a fix for an error that occurs when opening the armory, and a few other issues.

Why do I think this is the Bruen nerf? A concerned Call of Duty community member asked in the comments on how they are going to nerf a weapon just before Champs. She replied saying, ‘This tunes weapons they don’t use.’

Well, there you go! She did say ‘weapons’ so expect a Grau or FAL nerf too.

All said and done, if you haven’t unleashed the beast in the game yet, maybe you should hurry before it becomes practically unusable.