Sardar Patel Stadium (Motera): All You Need to know about the Ahmedabad Stadium under Renovation

Carla Suarez Navarro has been one of Spain’s best women’s tennis players. Over the course of her career she has managed to pick up 2 WTA titles and reach nine finals. She has also reached the quarter finals of all 4 grand slams and has earned almost $11 million.

Carla Suarez Navarro began playing tennis at the age of nine, her family moved to Barcelona to further her training. She began her career by playing in the 2008 Fed cup at the age of 20. 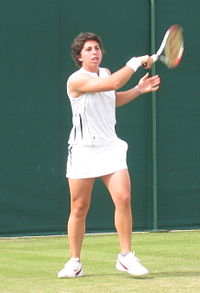 She rose to prominence by reaching the quarter finals of the 2008 French Open as a qualifier which was her first appearance at the main draw of a Grand Slam. She went on to reach 6 more quarter finals and finally broke into the top 10 in 2015.

That same year she also reached the finals of the WTA Tour Finals in the doubles category partnering Garbine Muguruza. In 2016 she achieved a career-high ranking of world no. 6 and also won her first Premier title.

After such successful career Carla Suarez Navarro gave some saddening news on 3rd December 2019. She announced that she would be retiring from tennis at the end of the 2020 season.

The 31-year old has not played her best tennis in the last few years dropping to world no.55 from a career-high ranking of world no. 6 in 2016. In the press conference announcing her retirement she said,

“I am beginning to have other priorities and tennis is a very demanding sport that requires a lot of sacrifice.”

In the conference she also talked about the 2020 season. She said,“This last year will be a year with the same expectations, just as intense, just as demanding.”

Carla Suarez Navarro has never reached the last-four of any major let alone winning one. She will be aiming to win one in 2020 to end her career in the most perfect way.

“I Find Myself Empty” – Garbine Muguruza