Both Chelsea and Liverpool have had decent starts to the season and the match at Stamford Bridge was seen as an exciting one. Antonio Conte’s team might have lost their 100% record last week against Swansea, but they were still unbeaten this season under the Italian’s guidance. Liverpool too came into the match with some really impressive results and a disappointing loss to Burnley earlier in the season.

And it was Jurgen Klopp who had the last laugh as Liverpool handed Chelsea their first defeat of the season. The Merseyside club beat Chelsea 2-1 after two first half goals from Dejan Lovren and a screamer from Henderson were enough to see off a late surge from the home side. We take a look at the major talking points from the Reds’ win over Chelsea at the Stamford Bridge.

Antonio Conte is known for his discipline across the field starting from the back. He had a very stubborn defence for Juventus and he did the same with the Italian national side. And when he made his way into the Premier League, everyone believed that he will do the same with Chelsea as well. Though we are just a month old in the league, the early indications certainly point to the fact that Conte will have major repair work to be done at the back for the Blues.

Though this was Chelsea’s first defeat of the season, their defensive performance has not been that impressive in any of the games so far. They have kept only one clean sheet which was against the newly promoted Burnley side.

The injury to John Terry certainly did not help the Blues as they were caught out far too easily on many occasions especially in the first half by Liverpool. And the Reds opening goal was a clear indication of Chelsea’s defensive woes. The whole defense was caught clueless as a completely unmarked Lovren found space to tuck the ball in.

This was not the only occasion either. Liverpool’s attackers were given too much freedom and space to play in the first half and Chelsea had to pay the price for it. It was also to be noted that a weak clearance from Gary Cahill gifted the ball to Henderson, before he unleashed quite an astonishing strike to double the lead. Ivanovic and Azpilicueta were caught in between the defense and attack due to a silly give away of possession. The situation was improved in the second half as the Blues pushed further forward. But these issues at the back have been earlier exposed by other teams also in the season. And this is an indication of the lack of clean sheets the London club is facing.

It is a fact that Conte still has the likes of Kurt Zouma recovering from an injury and it will be interesting to see if he will deploy the 3 at the back for Chelsea once he has a fully fit squad. But the problems at the back is something Conte should be addressing with a high priority as they seem to have enough firepower going forward.

The night also saw the return of David Luiz to Chelsea after his time at PSG. And many eyes were fixed on him to see how he would fare on his return to Premier League and Stamford Bridge. He had the added pressure of the manner in which he was brought in as well. Similar to his move away from Chelsea, his return to the Stamford Bridge club and the price tag PSG had attached to him raised many eye-brows towards the end of the transfer window. But this night, like his fellow defenders, would not be remembered as an impressive night defensively. David Luiz even had a bloodied nose after a clash of heads with Liverpool’s Sadio Mane. 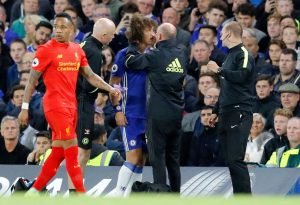 And for all those who were waiting to see how much Luiz has changed since he left the club and came back, well we would have to admit that we did not see much difference from the Brazilian centre back. He was brought in by Antonio Conte late in the transfer window after the Italian was adamant in getting defensive figures. And at a point were Chelsea is looking for stability and consistency at the back, the decision to bring back David Luiz for such a price tag would definitely have to be seen as a surprise.

And right from the early moments itself, we saw the same traits that he had shown during his earlier stint at the club. There were moments of strong defending, clubbed with some silly and casual give aways that nearly cost his side.

His role as the ball playing central defender also was sort of a 50-50 one. He had a total pass success of 92%. But his passes sometimes found the right target in the right manner while others were just give-aways. He also bombed forward to put in 3 shots but could not help his side draw level on the night.

Jurgen Klopp’s teams have always managed to entertain the crowd. Be it with the style of football that they play or the touhline celebrations that they put together, Klopp and his men have always been entertainers. And the story at Liverpool is no different. They have beaten Arsenal away from home, drew with Tottenham away from home and have thrashed champions Leicester City at home along with a disappointing defeat away at Burnley.

And right from the early exchanges of the game, it was evident that Liverpool were not prepared to give the Chelsea side – who themselves have had a good start to the season – much time on the ball. Liverpool were quick in closing down the play and were quick in bombing forward whenever they had the ball in typical Klopp fashion. And their high tempo and quick neat pressing play from the early exchanges itself meant that Chelsea had to struggle to get themselves into the game. They were quick to punish the home side for these errors as they went 2-0 up in the first half itself.

And many do believe that it was the first 30-40 odd minutes that sealed the result for Liverpool. 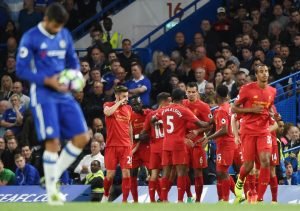 A much better second half from the home side meant that the stats had a more decent look to it. Liverpool had 47% possession and had a lesser pass accuracy of 84% compared to Chelsea’s 87%. Liverpool also were second best after 90 minutes when it came to accurate passes as they piled up 417 passes against Chelsea’s 478.

But the intensity and penetration and the tempo that Liverpool had especially in the early moments of the game proved to be a very vital component of the game as it was enough to give them the comfortable lead in the game.

Fabregas was a very vital component of Chelsea’s last title winning season. His partnership with Diego Costa and Eden Hazard was much praised during that fruitful year. But a dip in form saw him unable to emulate that performance last season.

And ever since Antonio Conte has come in, Fabregas has struggled to get some proper game-time under his belt. Conte has started all the games so far with the Brazilian Oscar playing the role in behind Diego Costa. Fabregas had a brief time on a couple of occasions this season to show his worth and he did impress during Chelsea’s late win over Watford. However tonight also saw Fabregas start from the bench and was eventually brought on in the 84th minute. 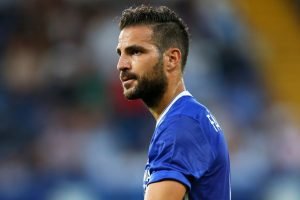 Since coming on, Fabregas was the engine room for all the good things Chelsea were throwing going forward and this was an indication that he still can be a very influential figure in this Chelsea line-up. He had 79% pass success rate and was instrumental in Chelsea’s late surge to get an equalizer. Fabregas had earlier mentioned that he will be fighting to get his position back in the starting line-up and he looks like deserving more playing minutes under Conte. Oscar has shown good signs of improvements as each game has progressed. But it still remains an argument whether he is good enough to keep Fabregas out of the starting line-up.

Liverpool’s win over Chelsea was Antonio Conte’s first defeat in a competitive match in charge of the London club for the season so far. But Liverpool have also brought an end to a very impressive home record for Conte.

The Italian had not tasted defeat in a club home fixture for the past 30 games. The defeat at the hands of Liverpool at Stamford Bridge was the first home defeat for a club managed by Conte in the last 31 games. 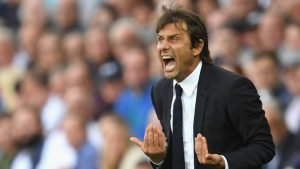 Conte’s team had won 25 home fixtures and drew 5. His teams have piled up a total of 66 goals, conceding just 19.

But that impressive record comes to an end after just 5 games in charge of Chelsea.