In the first semi-final of the Champions League T20, the Hobart Hurricanes take on the red hot Kolkata Knight Riders. The Kolkata Knight riders are on an unbeaten streak of 13 matches and would look to continue their good form going into the semis. On the other hand, the runners-up of this year’s Big Bash, the Hobart Hurricanes, suffered an early loss at the hands of Kings XI Punjab but since then have looked like a formidable line-up.

The first semi-final looks to be a mouth watering clash with the battle between KKR’s spin bowling trio of Piyush Chawla, Sunil Narine and Kuldeep Yadav against the pace of Doug Bollinger, Ben Hilfenhaus and Ben Laughlin in Hurricanes line-up.

For the Kolkata Knight Riders, opener Robin Uthappa and batsman Manish Pandey struck form in the last match providing the required stability in the stability at the top of the order. Both Sunil Narine and Kuldeep Yadav have stifled the opposition in the middle overs and have taken wickets as well. KKR would hope that their form continues in today’s match as well. But the X-factor for KKR could be their skipper Gautam Gambhir, because the left hander often rises to the occasion in big matches.

The Hobart Hurricanes have a well settled look to their line-up. Bollinger and Hilfenhaus will be the key to their success. Xavier Doherty can be the key in the middle overs if he can constraint the scoring rate. Shoaib Malik and Aiden Blizzard have been in great form with the bat and are one of the most experienced players in the line-up. Malik, with this experience of playing in the subcontinent for such a long time, will be the X-factor for the hurricanes. 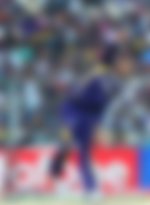 The mini battles which may affect the outcome of this clash will be:

The players who’ll get the better of their opponent in these mini clashes, would turn the tide in their sides favour.

The Kolkata Knight Riders look to be the downright favorites to win this match and register their consecutive 14th win. Having played all their 4 league matches in Hyderabad, the team is well adjusted to the conditions and the pitch at the Rajiv Gandhi International Stadium. Not only that, KKR are by far the best bowling team in the tournament and have not allowed their opponents to cross 160 even once. The Hobart Hurricanes would wish for their captain Tim Paine to lead the charge with the bat along with Blizzard and Malik. The Knight Riders have stuttered while closing out matches and have struggled on their way to victory. The Hurricanes would look to pounce upon any such opportunity if they may get one.