Rohit Sharma is one of the top performers of the Indian team. Recently, he was nominated for the Rajiv Khel Ratna Award by the BCCI. This is India’s highest sporting honour.

The limited-over vice-captain has put up an array of excellent performances. In fact, his performance during 2019 was spectacular where he scored five record-breaking centuries during the ODI World Cup. On top of that, he acquires the opening position for Test Cricket. He dominated this position as well with maiden double centuries. Overall, his score for Test Cricket stands at 556 runs and for ODIs stand at 1,667 runs. 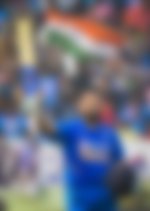 Rohit Sharma expresses his gratitude towards his nomination for the award. Moreover, he took the opportunity to thank BCCI, team mates, fans, and family.

“Extremely honoured and humbled to be nominated by the BCCI for the Rajiv Gandhi Khel Ratna Award which is the highest sporting honour in India. I am thankful to BCCI, my teammates, support staff, fans of the game and my family for sticking by.”

Nevertheless, if Sharma wins the award, then he will be the only fourth cricketer to achieve this. This is after Sachin Tendulkar, MS Dhoni, and Virat Kohli.

Even BCCI president, Sourav Ganguly, said that Rohit Sharma has contributed heavily to the cricket industry.

“Rohit Sharma has set new benchmarks as a batsman and achieved scores people thought were not possible in the shorter formats of the game. We feel he is worthy of getting the prestigious Khel Ratna Award for his commitment, conduct, consistency and his leadership skills.”

BCCI nominates players for the Arjuna Award as well

“Ishant Sharma is the most senior member of the Test squad. His contribution has been vital in Indian team’s long run as the No. 1 Test side. Fast bowlers are prone to injuries. Ishant has had a fair share of them but he has fought hard to be back on the park every time.”

“Shikhar has been consistently scoring at the top and his performances in the ICC events have been significant.”

“Deepti is a genuine allrounder and her contribution to the team has been vital.”