Afghanistan leg-spinner Rashid Khan recently hosted a live chat on his Instagram account in which he answered several questions of his fans and followers. During the live chat, the England fast bowler Jofra Archer trolled the Afghanistan cricketer for his hair cut.

The world has come to a standstill due to the coronavirus outbreak. Many countries are under lockdown and everything is closed except a few daily use shops. The COVID-19 pandemic has also resulted in all the cricket tournaments and series being canceled or suspended for an indefinite time.

As a result, cricketers are practicing self quartination while being in their homes. They are also utilizing this time by interacting with their fans on social media. Rashid Khan is a new addition to this. He decided to answer the queries of his followers by going live on Instagram.

However, the bowler had to face criticism due to his not so perfect hairstyle. The Afghan cricketer was having longer hair than usual and this didn’t go unnoticed by the England pacer Jofra Archer.

Jofra is quite active on social media. He took a friendly jibe on his fellow cricketer Rashid saying, “You need a haircut Rash”.

Take a look at message by Jofra Archer 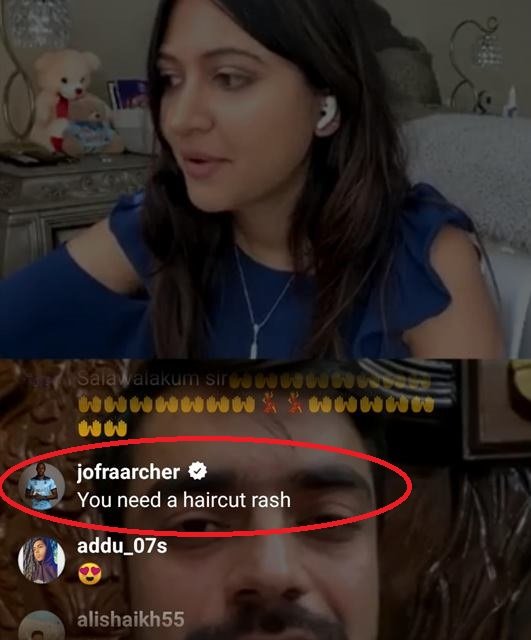 Owing to the lockdown Rashid is unable to get a haircut while this has not been a problem for a few cricketers. Players like Virat Kohli and Suresh Raina managed to style their hairs amidst lockdown also. The credit for this goes to their respective wives as they turned hairstylist for their husbands.

During the live chat, Rashid also revealed his favorite Indian batsman. He named MS Dhoni, Virat Kohli, and Sachin Tendulkar as his favorites. Talking about the bowlers, he chose Jasprit Bumrah and Bhuvneshwar Kumar. Bhuvi and Rashid play for the same team in the Indian Premier League, Sunrisers Hyderabad (SRH).

Both Jofra Archer and Rashid Khan are good friends and play an important role in their respective IPL teams.

Archer plays for the Rajasthan Royals (RR) and Rashid is a member of Sunrisers Hyderabad (SRH).