Indian cricket team captain Virat Kohli shared a funny banter with former England cricketer Kevin Pietersen on Instagram. Both Kohli and Pietersen are good friends off the field and have played for the IPL franchise Royal Challengers Bangalore together in the past.

The whole world is in lockdown from the past two months in view of the COVID-19 pandemic. There is no game of sport happening anywhere in the world right now. As a result, cricketers are spending their time at their respective homes while being in self quartination. This has also given the cricketers enough time to spend time with their families and fans on social media.

Recently Virat Kohli posted a throwback picture of himself on his official Instagram handle. It was a sun-kissed picture and the cricketer was sporting a little beard.

On this picture, Kevin took a friendly dig at the Indian captain. He commented, “Shave your beard off”. However, Kohli trolled the England superstar by mentioning his TikTok videos. Virat replied, “Better than your tik tok videos.” 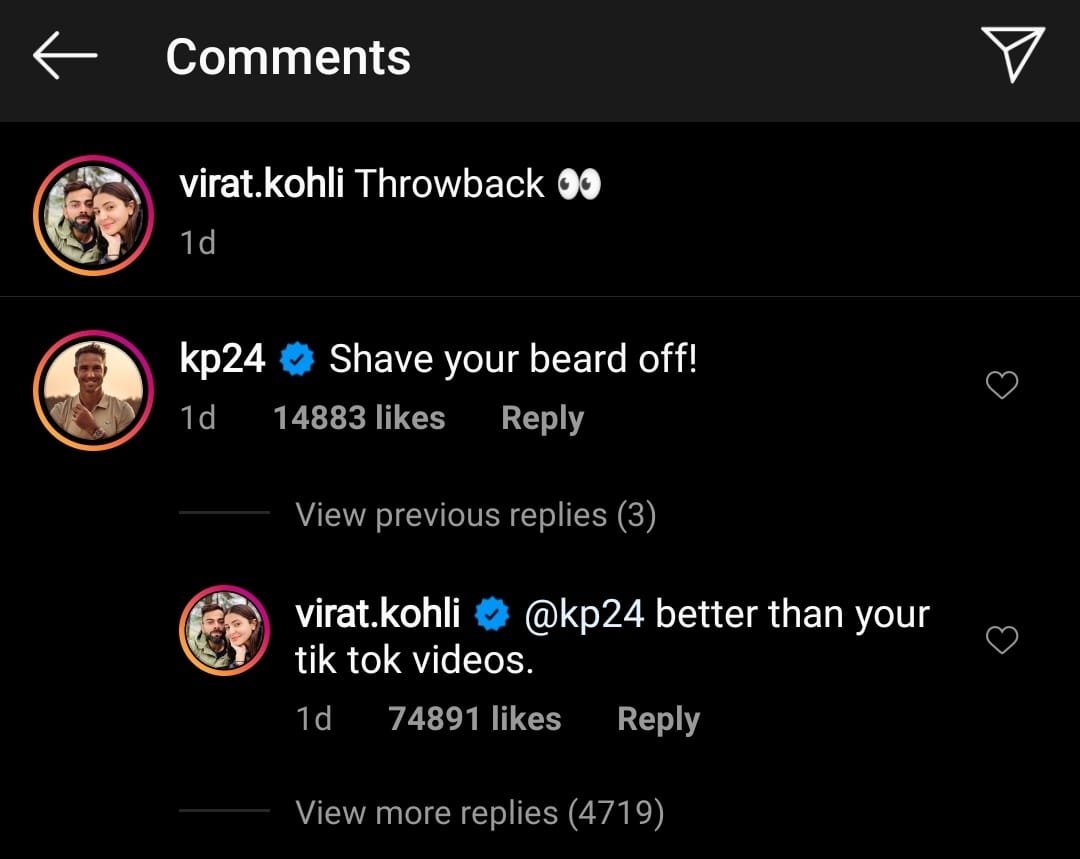 This was not the first time Kevin Pietersen mentioned Kohli’s beard. The two cricketers had this conversation many times in the past. A few days back, Pietersen had made a similar comment on Virat Kohli’s video. Virat had shared a video of him trimming his beard and had urged his fans to do the same. His post read, “While we’re all indoors, it’s extremely important to do stuff that makes you feel good. Staying well-groomed is one of the things that keeps me in the zone. So I thought of trimming my beard at home and giving myself this new look,”

While we're all indoors, it's extremely important to do stuff that makes you feel good. Staying well groomed is one of the things that keeps me in the zone. So I thought of trimming my beard at home and giving myself this new look. 😊 Now I want all of you to take the #TrimAtHome challenge and post your new look! 😎

Kevin’s comment on this post of Kohli was quirky and playful. He had written, “Does it get rid of your grey there buddy?”

The two batsmen got engaged in an interesting conversation on Instagram live earlier in April. During the session also, Kevin had urged Virat to shave off his beard when the latter had shared about his cheek fat.