West Indies star Michael Holding doesn’t support England cricketer Ben Stokes for his claims on former Indian cricketer MS Dhoni. Stokes had accused Dhoni of not showing the intent of winning in the match against England during World Cup 2019.

The Indian team couldn’t chase the target of 337 runs in 50 overs. It could manage to score only 306/5 while batting second. Ben Stokes mentioned in his book, ‘On Fire’ that the Indian batsmen weren’t keen on winning the match.

Ben wrote, “Arguably, the way MS Dhoni played when he came in with 112 runs needed from 11 overs was even stranger. He appeared more intent on singles than sixes. Even with a dozen balls remaining, India could still have won. There was little or no intent from him [Dhoni] or his partner Kedar Jadhav. To me, while victory is still possible you always go for broke,” 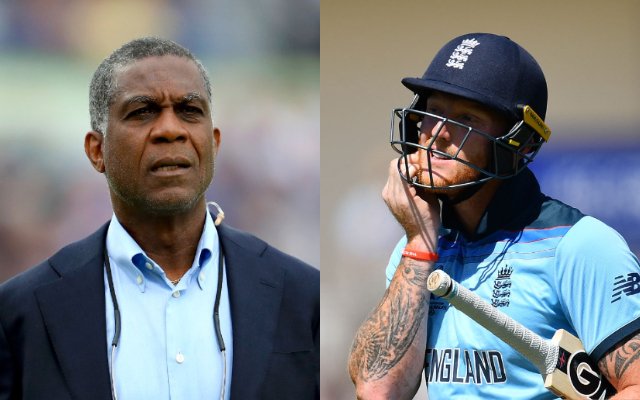 The accusations of MS Dhoni didn’t go well with West Indies cricketer Michael Holding. He rubbished the claims made by Stokes saying that people write anything in the books to be in limelight.

In an interview on YouTube, Holding said, “Well, people will write anything in books these days. Because people are a lot freer with their opinions and when they are writing books, they need to be making headlines at times,”.

Highlighting the circumstances in that match, Holding revealed that the Indian side had put in their 100% efforts to win the match. However, it wasn’t their day and they lost the match.

The 68-year-old said, “But, to be honest, a lot of people watching that game perhaps wouldn’t have arrived to the same conclusion that Ben Stokes arrived at that India was not trying to win. It wasn’t the game that India had to win, but I don’t think anyone can say that was a team tactic to lose the game.”

The pacer further added, “I watched that game and it appeared to me as if India weren’t putting up their 100%. But I realized it wasn’t the case when the expression on MS Dhoni’s face told me that he desperately wanted to win, so I don’t think it was a team decision to not try to win,”

“But I don’t think they went with the same intensity of wanting to win the game, say, if it was a do-or-die situation. If it was, we would have seen a different game.”, concluded Holding.