The Legend That Could Have Changed the NBA Legacy of Michael Jordan, Larry Bird and Others

Virat Kohli and AB de Villiers took to an Instagram live chat to discuss various topics. One of the highlights of the chat was the two of them picking the best XI together.

To keep things simple, they decided to let Virat Kohli pick the even number players and AB de Villiers pick the odd number players. Additionally, they took an approach of picking an Indian player and South Africa player alternatively. Moreover, they did not go too far back and kept it within their era. Therefore, the players are from within the last 7 to 8 years.

The 1st position was given to Sachin Tendulkar by AB de Villiers. The 2nd position was picked by Virat Kohli. He picks none other than Rohit Sharma. Villiers immediately agrees that this is a great choice. This was the opening pair of their best XI.

When it comes to the 3rd and the 4th position, they decide to put Kohli and Villiers at the respective spots.

They select Jacques Kallis as the 5th member of the line up. Next, the 6th position goes to none other than Yuvraj Singh. At this point they wanted to select a strong all-rounder. Both of them agreed that Yuvraj Singh deserves this spot.

The 7th spot of the team along with the wicketkeeper and skipper position goes to MS Dhoni. AB de Villiers says that while he has never played under Dhoni, he believes in the strong leadership skills the former Indian skipper has. 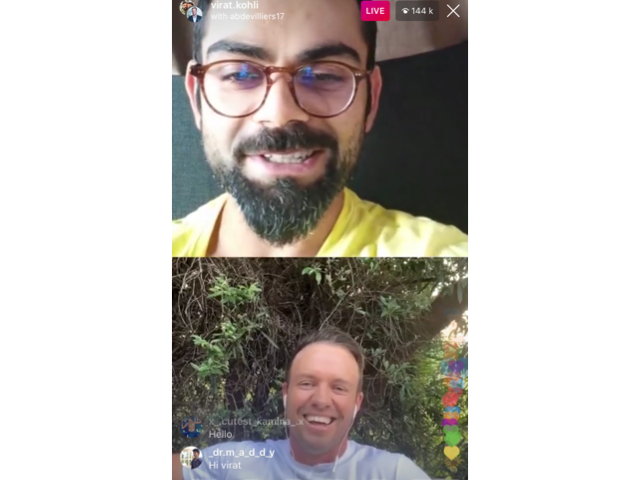 The RCB stars take a moment before deciding the 8th position

Now, they wanted to give the 8th spot to a spinner. Considering they could not decide on whom to give the spot to, there was slight debate over whether Yuzvendra Chahal or Jadeja. However, after some consideration, both players decided to go ahead with Chahal.

AB de Villiers selects Dale Steyn as the 9th position. At this point, Virat Kohli says that he has the perfect order. He proposes to put Steyn at 9th position, Jasprit Bumrah at 10th, and Kagiso Rabada at 11th. Villiers agrees with this at an instant.

Finally, the two of them decide on Jonty Rhodes being the fielding coach. When it comes to the team coach, both of them select Gary Kristen.