At the European Dressage Championships in Germany, while Jessica Von Bredow-Werndl won a golden hat-trick, Isabell Werth settled for the 4th position, losing out on a potential medal.

Isabell Werth is a German equestrian legend in dressage. She has an incredible winning streak of 12 Olympic medals, out of which 7 were gold. Interestingly, the legendary athlete also has a computer game about her, launched in 2017. Even though any professional athlete above the age of 40 is considered old, Isabel doesn’t seem to fall into this category.

She has not only won a total of 26 European Championships but is also an 11 time World Champion. Furthermore, she holds the record for the most Olympic medals won by any equestrian athlete. Clearly, age is just a number for her.

Even though Isabel has been the star of the show for quite some time, another German dressage, Jessica von Bredow-Werndl, is also making long strides in her career to give the former a tough competition. At the Summer Games in Tokyo, she successfully won two gold medals; an individual gold with her mare Dalera, scoring 91.732% in freestyle. She also earned gold with her team, along with Isabell Werth and Dorothee Schneider.

Recently, the two Germans competed in Hegan for the European Dressage Championship. Achieving another gold, Jessica von Bredow-Werndl completed a hat-trick. While Denmark’s Catherine Dufour fetched the silver medal and Charlotte Dujardin settled for bronze, Isabell Werth lost out on a medal.
Securing the 4th position, it is unfortunate that she will not feature on an individual championship podium. It was disappointing for her to score 84.89% with her mare, Weihegold, making a couple of mistakes here and there. 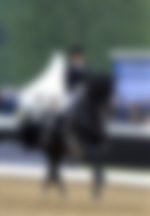 For Jessica, this was a monumental victory. Expressing her feelings about the feat, she said, to Horse&Hound, “I’m so grateful to have such a wonderful mare with me and I couldn’t have asked for more. She is wonderful“. After winning 5 gold medals within a span of 6 weeks, we cannot deny that the champion of the European Dressage is on Cloud 9.

Divya Chaturvedi is an Olympic Athletics author at EssentiallySports, currently pursuing her Under Graduate degree in Psychology from the University of Delhi. She's also an internationally recognized athlete, specializing in Shot Put and Discus, representing India at the International Children's Games held in Australia has been one of the biggest feats in her endeavor so far. Having participated in The Road to Wimbledon and representing the state several times, she bagged a number of titles for the same.
ARTICLES BY AUTHOR