The soundtracks and music stations of GTA games are an integral part of the gameplay and some of the songs from the O.G. GTA games are etched into many players’ hearts. These songs invoke nostalgia and fond memories for many people, along with the amazing gameplay content of these titles.

In light of that, this news might disappoint several fans, but due to licensing issues, some of the most iconic songs from the Trilogy of GTA games might not be available in the definitive edition. Fans reacted to this development on Twitter with much disappointment. 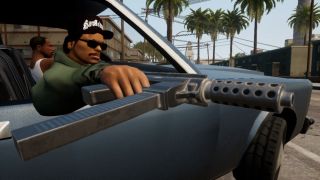 GTA Trilogy will have the following songs removed from the track list in GTA Vice City and San Andreas.

Netizens have been quick to notice this change and have taken to Twitter to express their reactions to the same. Of course, it’s a major loss to not hear Billie Jean playing while driving around the streets of Vice City and NWA’s Express Yourself in San Andreas. Here are some of the best reactions so far.

NO MICHAEL? NO MICHAEL!!!!
NO BILLY JEAAAN!

That's too bad, man. Vice City had a great soundtrack. Glad I still have my copy of Flash FM and the V-Rock station. So bummed about these missing tracks.

HOW THE FUCK CAN YOU LOSE THE RIGHTS OF A SONG FROM A FICTIONAL BAND FROM YOUR OWN GAME?!?!?!

Not definition edition then

Good thing I play on PC so I can just import mp3 files like the others. Well at least I hope you can in the definitive edition

this 'remaster' just looks like a high-res texture mod

What do you think of the new GTA Trilogy: Definitive Edition? How much do you think the games miss out by not having the classic soundtrack? Let us know in the comments below.