“It’s Been an Interesting First 4 Races Back”: Jimmie Johnson Shares His Experience of the NASCAR Return Races

FaZe is the most prominent eSports team in the world. They have won many accolades in the last decade, and their journey is nothing short of an epic story. Today, as they mark their ten years of evolution, FaZe posted a video on Youtube sharing their growth with the fans.

Their video showcased all their favorite moments, and most team members made an appearance to honor their love for the team. You can watch the video below.

The origin of FaZe

FaZe clan was founded on May 30, 2010. They started as YouTubers who upload game footage of Call of Duty. Slowly, they changed track and created their world where they were allowed to develop and explore.

Clan member FaZe Temper elaborated that they couldn’t stick with only one game and slowly started experimenting. They got into vlogs and real-life challenges. These weren’t received well at the start, but now looking back at it, that’s where the evolution began.

“We couldn’t rely on Call of Duty to come out with a new game every single year. We had to do something else and step out of our comfort zone. So, we started integrating vlogs and personality making. Showing our faces more…”, FaZe Temper said.

Faze apex continued, “Which sounds like it’s nothing big, but at the time, it was a huge step for us. Nobody in our scene really vlogged, and it wasn’t well received. Our fans did not want to see anything but in-game videos, but we started making more content. We did skits, vlogs, real-life challenges, and slowly over time, FaZe started to evolve.”

The team grew further with all their vlogs. They had themselves doing vlogs full time, and, indeed, they didn’t get the attention they deserved in the beginning. That is not the case anymore, and stats don’t lie.

In 2014, the team decided to make a huge move. Members moved into a house together in New York. They were the first eSports team to do so, living under one roof with people from all over the world.

Starting off as YouTubers playing COD, they soon shifted to games like CS: GO, FIFA, Fortnite, PUBG, and many more over the years. Their first major win as a team was at CS: GO Boston. It was one of the biggest events, and a win gave the entire team a boost to do better. 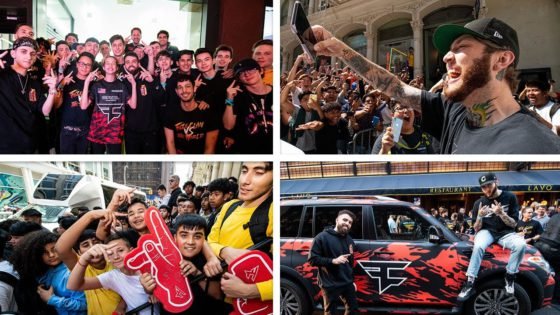 The clan slowly expanded from gaming to entertainment to a lifestyle brand. They have a lot of sponsors and have collaborated with some of the biggest names in the United States. FaZe Cizzorz recalls working with the NFL as one of their biggest moments.

They even had Steelseries commercials and merchandise personalized for them, and at one point, Nissan too jumped in.

The Takeover and the future

FaZe won the Fortnite world cup with Cizzorz leading them to victory. The same night the clan shocked their fans when they announced their first female member – FaZe Ewok.

The team believes their momentum can take over the world and, at one point, become one of the most dominant organizations in the world. The eSports team is already a huge name, and when asked where they see themselves ten years from now, CEO of FaZe Lee Trink replied, saying their clan will be the greatest franchise in all of sports entertainment.

Team members acknowledge that the bond they have and the friendship they made are irreplaceable. They say that they grew up in FaZe and learned to believe in themselves when no one else did.

In honor of Goerge Floyd, FaZe made the ILLCAMS collections of the last years available in their stores. They have also announced their official recruitment for the year via Twitter.

The 10 Year ILLCAMS collection is now available on our store. In honor of George Floyd, who had his life taken away from him in an unacceptable act of racially charged violence, all profits from this sale will be donated to the Memorial Fund in his name.https://t.co/6GfK7YqF1x pic.twitter.com/tLUXFn5vlS

A team is as strong as its members, and FaZe is an excellent example of that statement. Ten years ago, they began their journey just like anyone else. Now, they are the biggest name in eSports. We congratulate FaZe on completing ten historical years.