Sadly, there were no last-lap heroics from Lando Norris at the Spanish Grand Prix. The British driver endured a relatively uneventful race to barely finish in the points. Norris regretted not being able to show off the team’s race pace.

Despite getting off the line well, Norris quickly joined a gaggle of cars that he could not pass until the end of the race. Nevertheless, he managed to fend off some spirited moves from Charles Leclerc during the race.

It backfired on me: Lando Norris

Reflecting on his race, Norris believes he “should have risked more”.

“I lost those two positions in the very beginning,” said Norris. “Not off the line, my launch was really good, it was just more into Turn 1 that I didn’t attack enough, I didn’t risk it enough, but sometimes it’s like that,”

Echoing fans sentiments, Norris called for the sport to consider a different track. With minimal overtakes, the Catalunya circuit made for a snooze fest yet again.

“Maybe we need to change it for next time, because it’s so difficult to overtake here as we know, and it was proven again this weekend. I think we had good pace, which was a shame because I couldn’t use it at all. 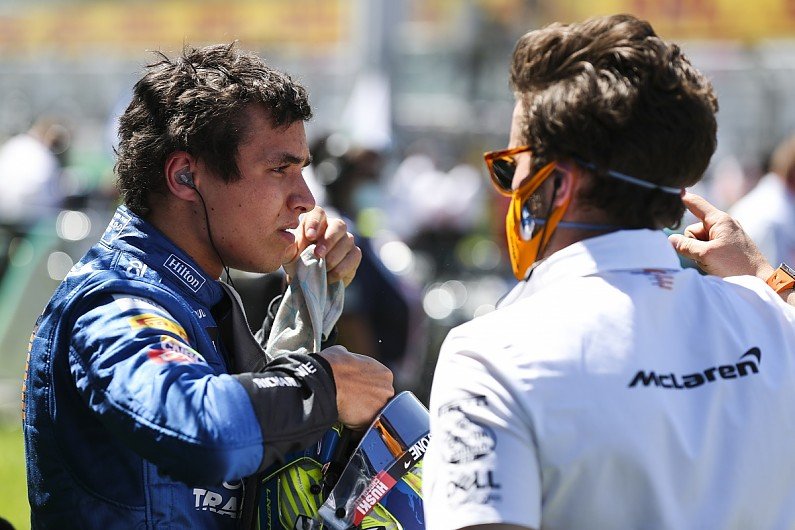 “Maybe I should have taken more risk. I know it’s a very difficult track to overtake on and to race on so every little position is really going to help in the race – maybe I really should have risked more.”

Norris wasn’t the only driver who failed to make any meaningful progress throughout the race. With soaring temperatures, tire management proved to be the deciding factor in the winners and losers for the Spanish Grand Prix. Those on a one-stop strategy benefited the most in the midfield.

“But it’s not something I’ve always been struggling with – it’s something that I’ve improved on lots since last year and I’ve been taking the right amount of risk and this time I couldn’t take quite enough, and it backfired on me.”

While Norris struggled to cut his way through the pack, his teammate capitalized on Alex Albon’s struggles to finish a magnificent sixth.

The F1 circus heads to Spa for the Belgium Grand Prix on August 30.