Defending Champion Lewis Hamilton cleared the air over his “tire pressure” remarks directed towards Red Bull at the 70th Anniversary Grand Prix. During the race, Hamilton speculated that Verstappen’s RB16 appeared to have lesser pressure in its tires.

Turns out, the Briton wasn’t accusing Red Bull of any wrongdoing but merely pointing out that the Verstappen’s tires were in good nick by virtue of better management.

Lewis Hamilton has a penchant for questioning rivals whenever they manage to challenge the mighty Silver Arrows. Fans may remember Hamilton’s “interesting tactics” comment directed at Ferrari, back when the Italian team was competitive.

Just a theory that I had: Lewis Hamilton

But his remarks on Sunday were more of an observation based on Mercedes’ own struggles. The British driver clarified exactly what he meant in the post-race press conference.

“When we go out and we start the race we have minimal pressures and then during the race they increase.

“With more laps, they go on a steep rise and I assume that we just went on a much steeper rise and increase in pressures than… In general, to look after your tyres, you need to keep the temperatures down and hence the pressures, so that wasn’t really my thought processes when I was out there. 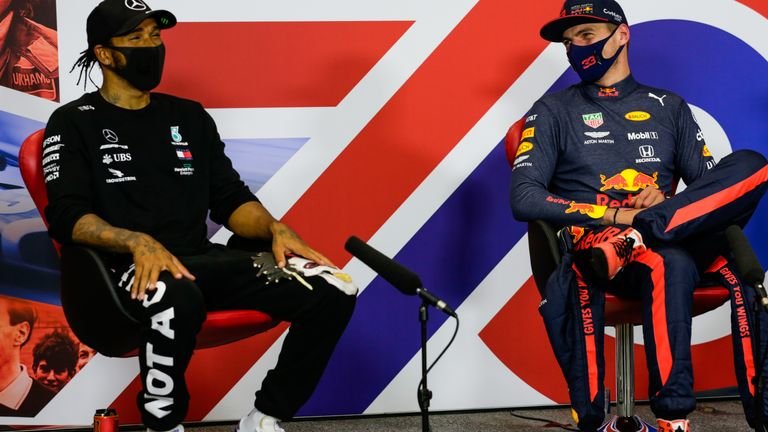 “They must be able to keep their pressures lower than ours,” said Hamilton “And that’s why ours were blistering and that was just a theory that I had.

“I wasn’t saying that they have different settings to us, because we all have the same minimum but if you can keep your pressures lower then you can go further and make the tyres last longer, so I think that that’s probably – I’ll find out later but I’m sure that’s part of the issue that we had probably.”

Hamilton’s theory does make sense but it ultimately boils down to Mercedes struggling to look after its tires in the heat. The W11 was simply too ruthless on Pirelli rubber, which has been the team’s Achilles heel in the past.

The Brackley outfit will be wary of its tire struggles in Spain, with temperatures soaring higher than Silverstone as F1 goes racing in Barcelona on August 16 for the Spanish Grand Prix.

Mercedes: F1 Rivals May Have Tipped Off FIA Over Hamilton Practice Start Breach