According to the latest reports, Mercedes team principal Toto Wolff and Daimler are at crossroads over Sebastian Vettel. Allegedly, Mercedes’ parent company is in favor of signing the 4 times World Champion but Wolff isn’t on board. Keep in mind, these are rumors so treat them accordingly.

Wolff and Daimler at odds over Sebastian Vettel

While Toto Wolff hasn’t rejected the possibility of Vettel joining Mercedes, he’s hinted at the team retaining its drivers. However, the Austrian has acknowledged Vettel’s strengths and how Mercedes would benefit from Seb joining the team. Being German, Vettel would greatly help the Brackley outfit, if he joins Mercedes. 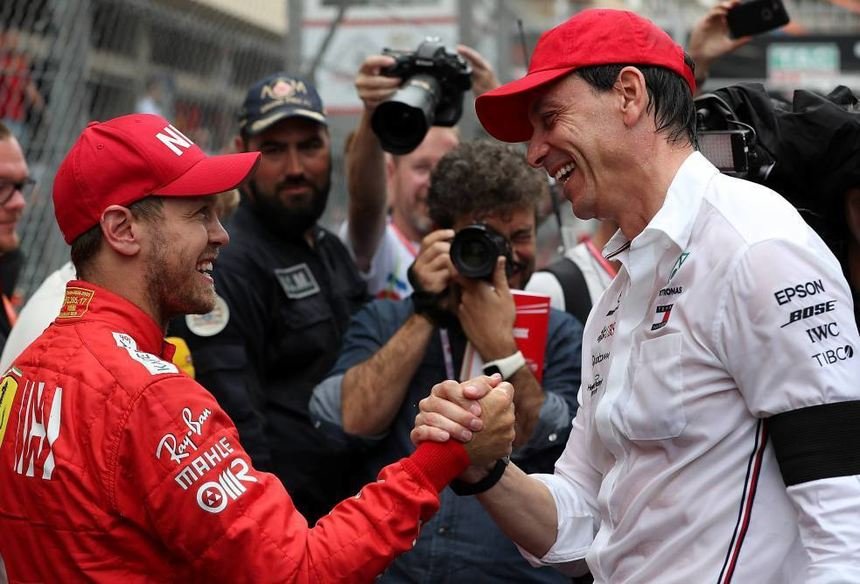 Apart from the Marketing aspect, Vettel’s experience could come in handy for the German team. Yes, some would argue that Lewis Hamilton is experienced enough but the German’s insights could help Mercedes build the ultimate machine.

Despite all the positives of Vettel signing with Mercedes, there are some very good reasons to not do the same.

All Mercedes needs to secure Championships is one strong driver and a team player who can rise to the occasion when needed. Lewis Hamilton has been the team’s star driver since the turbo-hybrid era and is showing no signs of slowing down. Mercedes can rely on the Brit to do what he does best and bring the silverware to Brackley.

With Bottas, they have a strong driver who’ll play the team game when required and support Lewis when the need arises. More importantly, Bottas’ role in helping the team secure the Constructors’ Championship isn’t insignificant by any means. As a result, Mercedes can stick to their current drivers and continue dominating the sport.

However, it appears the team’s parent company is pushing for Mercedes to sign Sebastian Vettel. According to Italian columnist Giuliano Duchessa, Toto Wolff is reluctant to break up the team’s current pairing. Allegedly, Hamilton is in favor of keeping Valtteri Bottas as his teammate.

F1 fans have been dreaming of Sebastian Vettel facing Lewis Hamilton in equal machinery. Hamilton against Vettel makes for great entertainment but also results in a giant headache for Mercedes.

The odds of Vettel joining the Silver Arrows are very slim, but could pressure from the higherups force Toto to rethink his decisions?