The 2020 Racing Point F1 car has been revealed! Well, not officially, but through a leaked image on Reddit. Racing Point will officially unveil its 2020 car tomorrow. So, if you would like to wait for the actual reveal, consider this a spoiler warning.

Racing Point didn’t have the best campaign last season. The team struggled in the early parts of the season and particularly in qualifying. However, a few spirited drives from Checo on race day meant the team were able to salvage points to prevent a complete disaster.

Lance Stroll, on the other hand, struggled in qualifying and missed out on Q2 on several occasions. Nevertheless, the Canadian driver more than made up for his weakness by delivering solid performances on Sundays. 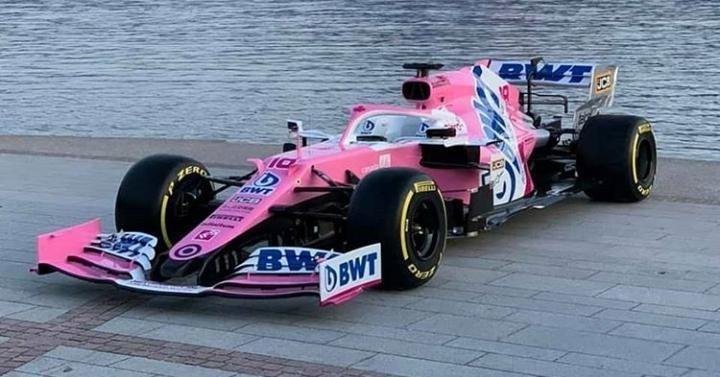 First impressions of the new Racing Point? Its… pink. You probably guessed that part, but in all seriousness, the 2020 car looks a lot pinker compared to previous iterations. The 2020 livery bears a close resemblance to the 2019 F2 team livery – Arden.

The 2020 car will most likely be called the RP20, should previous nomenclature be followed. At first glance, the new car features a redesigned side pod and slightly revamped bargeboard area. Another change includes a restructured nose, which includes an aesthetic modification. The underlying theme in the RP20 is pink.

This will be the last season that Racing point competes under the same name. The team will be rebranded into a works Aston Martin F1 team in 2021. Canadian businessman Lawrence Stroll purchased a minority stake in the struggling automaker, providing a much-needed financial boost.

The consortium, led by Stroll – saved the British manufacturer from certain collapse. This will result in Aston Martin making a comeback to the sport, replacing Racing Point.

Sergio Perez has already signed a long-term contract with the team until the end of 2022. Lance Stroll is also likely to be retained as a driver, for the foreseeable future.

The Silverstone outfit will unveil its 2020 car at BWT’s headquarters in Mondsee, Austria. BWT is one of Racing Point’s main sponsors which is the reason for the pink theme of the car.

Racing Point, formerly known as Force India has earned a reputation in F1 for scoring the maximum points with minimum investment. The team would like to regain that lost form heading into 2020.

“The F1 One Is More Celebrities, People Like Liam Payne”: Lando Norris Gives His Preference in Esports Events