Jorge Masvidal Apologizes to Stephen A Smith for a Strange Reason

Yesterday, Ferrari launched its car for the season, SF1000. The launch event was wildly extravagant and guests included team boss Mattia Binotto. And drivers Sebastian Vettel and Charles Leclerc. Unlike the last year, Ferrari have not declared anyone as their number one driver. And during the SF 1000 launch event, Sebastian Vettel talked about not being the number 1 driver this year.

He was talking to a reporter from RTL, a German news channel. RTL reporter asked him about his position in the team. He said that he need not worry, as they both will drive the same car. And anything else will be decided on the track. And added that last year wasn’t good for him but he doesn’t need to hide anything.

Does it bother you that you are not declared as the No. 1 for this season?

Vettel: It doesn't make any difference. We both have the same car, the same conditions and the rest will be decided on track. I am not worried in that regard. I don't have to hide myself.#F1 #RTL pic.twitter.com/zUjwxKsFa6

“Does it bother you that you are not declared as the No. 1 for this season?”, Reporter asked

Vettel replied, “It doesn’t make any difference. We both have the same car, the same conditions and the rest will be decided on the track. I am not worried in that regard. As I said, last year, here and there it wasn’t good on my side. And it didn’t work smoothly but I don’t have to hide”

Sebastian Vettel on what to expect from the car

Sebastian Vettel said he expects Ferrari’s 2020 Formula 1 car to be a “step forward” from its predecessor. And thanked the team for putting many “clever” innovations in the car.

Vettel said: “It’s impossible to predict but first of all, there’s a lot of hours and effort that went into the car”. He added, “I think it is a step forward, and I hope it will feel like that when I drive the car. But I can be sure of plenty of commitment from all the people that are here and at Maranello working to improve the car even further” 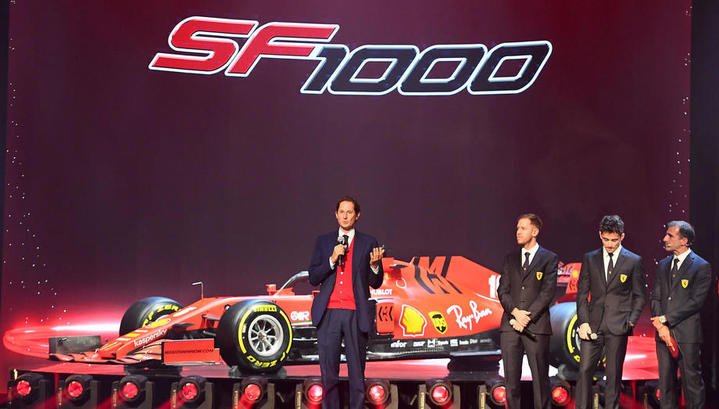 The event happened at the Romolo Valli Municipal Theatre near its Maranello headquarters. And all the who’s who of Ferrari were present.

Ferrari heads into 2020 looking to end a run of 12 years without any form of championship silverware, with its last title coming in the form of the constructors’ crown 2008. The forthcoming season also marks Vettel’s sixth campaign driving for Ferrari.