Ferrari has informed Sebastian Vettel that it is ready to discuss the conditions for a possible extension of the contract. The four-time world champion is not particularly hostile to a perspective extension. Of course, a lot will depend on the team’s performance in 2020. And his dynamics with team boss Mattia and teammate Charles Leclerc.

Earlier Mattia said during the car launch, “Discussions with Sebastian have already started, they started before Christmas at the end of last year and continued here”

This report proves that Mattia Binotto didn’t lie when he freely proclaimed that, Vettel is there number one choice to partner Leclerc at the team. 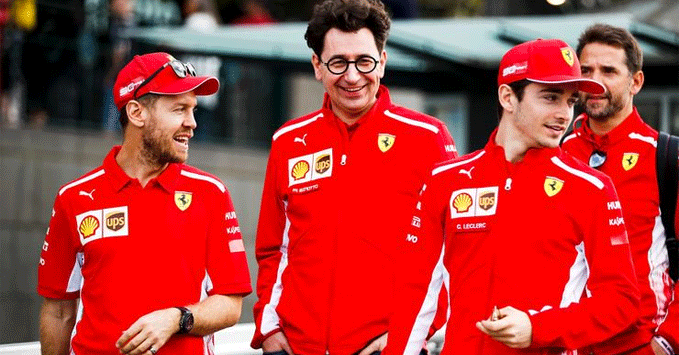 With Lewis Hamilton bound to remain at Mercedes F1. Ferrari would have a scope of chances with Ricciardo, Sainz or Giovinazzi. However, right now none of the theories seem to work out for Scuderia Ferrari. Hence negotiations with Vettel, at present is the most logical choice.

Ever for Vettel, the prospects at Red Bull are negligible and with no other alternative Ferrari is the obvious choice.

Sebastian Vettel: Why Ferrari F1 Should Keep Him for 2021 and Beyond

"Ferrari has informed Vettel that they are ready to discuss the conditions of a possible contract extension. Seb is not against this perspective!"https://t.co/IwYwcLYscv#F1 #Ferrari #Seb5

Vettel has been with the team since 2015. He parted ways with Red Bull F1 in 2014 and joined Ferrari on a 3-year contract.

In his first season with Ferrari, Vettel won three races and was the closest challenger to the Mercedes drivers. However, in 2016 he finished fourth in the championship with not even a single victory.

Vettel bounced back in 2017 and 2018, winning a number of races and topping the driver’s standings a number of times in close World Championship battles with Lewis Hamilton. However, both years saw his title hopes end in Mexico as he finished both seasons as runner-up.

The German driver had a disappointing 2019 season, where he finished 5th in the WDC behind his teammate Leclerc. He ended the season with just 1 victory in Singapore. And eight podium finishes.