He’s the CEO and team principal of one of the most dominant F1 teams in the sport’s history. However, the other side to Toto Wolff, when he’s not running Mercedes, remains largely unknown. Here’s everything you need to know about Toto Wolff- the family man.

The other side to Toto Wolff

Toto Wolff is married to Susie Stoddart, who’s a keen racer and team principal herself!

Susie was the first woman to compete in a Formula 1 race weekend in over 22 years. She made her F1 debut at the 2014 British Grand Prix, taking to the wheel of the Williams FW36. Susie competed in two free practice sessions that season.

Following a brief stint in F1, Susie retired from the sport in 2015. She currently operates as team principal of the Venturi Formula E team, where she’s also a stakeholder. 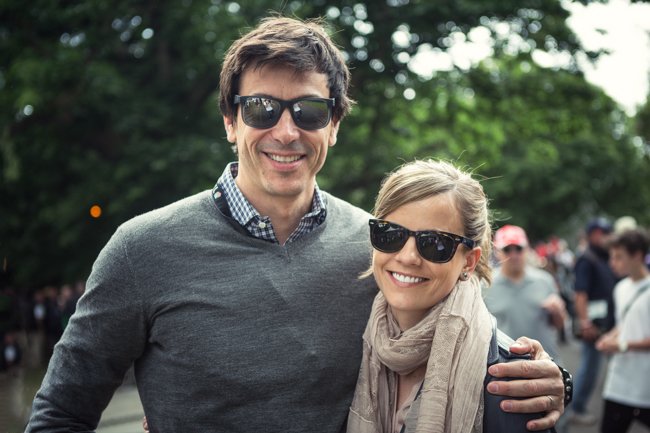 Susie and Toto tied the knot in 2011 and have a child together. Toto’s son – Jack Wolff was born on April 10, 2017. Toto revealed that his first date with Susie was in Hockenheim at the Achat hotel.

Wolff also has two other children from a previous marriage. Wolff was previously married to Stephani and the marriage lasted 10 years before the pair called it quits. However, Wolff maintains that he shares a healthy relationship with his ex-wife and children.

“I am in the very lucky situation that we are a true ‘patchwork family’. Susie is the centre of pulling that all together – and my former wife Stephanie. Both put the wellbeing of the kids above their own. I’ve been together with Susie now for eight years and my kids have always been a very important part of that relationship. And Stephanie, the mum of my kids, handled it in the same way. Now we spend Christmas and holidays together. And as tough as a divorce is, we all grew.” Said Wolff in an interview with F1.

Wolff has two homes, in the United Kingdom and Switzerland. In the UK, Wolff resides in Oxfordshire. While he also has a residence in Ermatingen, overlooking Lake Constance.

Despite having a sizeable fortune, Wolff prefers leading a life that’s free from glitz and glamour. As someone who started from humble beginnings, Wolff knows the importance of staying grounded.