Formula one winter testing officially begins tomorrow. Yet, we’ve seen nearly all the teams doing practice runs on a circuit. This begs the question, why are F1 teams allowed to ‘test’ before the actual test? The answer lies in F1’s Sporting Regulations, which has an interesting clause that teams exploit.

Why is F1 testing allowed before the actual test?

The Fédération Internationale de l’Automobile, commonly known as the FIA is the governing body for many motorsports’ events held around the world. This includes F1, F2, F3, Formula E and rallying as key examples. The FIA produces regulations and guidelines for all categories of motorsport under its control.

You’ve probably seen teams running their 2020 cars as part of a ‘shakedown’. A shakedown is basically a small test, where teams experiment and evaluate newer components on a car.

One of the key elements in these shakedowns is the distance limit – which is 100km. It’s no coincidence that all the teams are running the same distance. This is where the Sporting Regulations kick in and limit teams’ track time use. 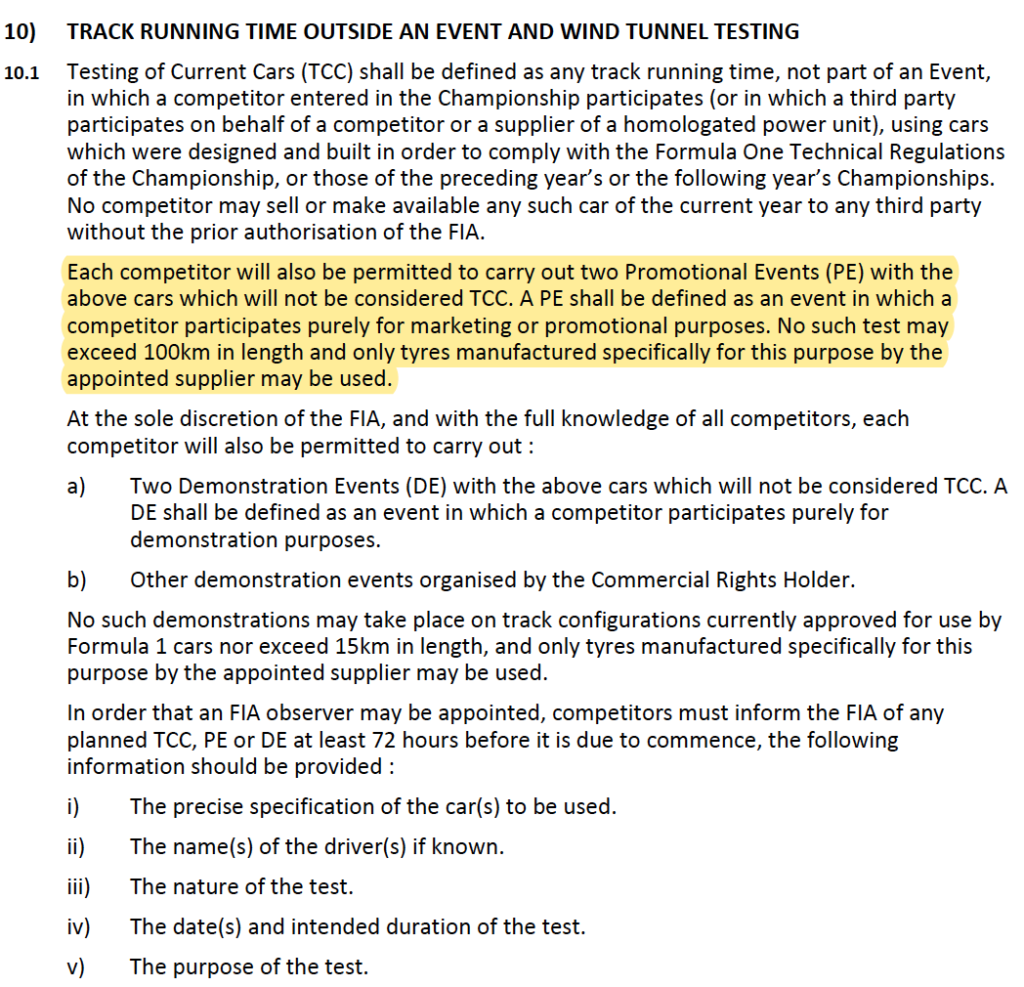 According to Art 10 of the official FIA Sporting regulations, under sub-section 10.1- the guidelines specifically mention a stipulation regarding teams’ track time running.

As per the rules, the teams can perform 2 promotional events and conduct running at a length not exceeding 100 km.

The keywords here worth noting are ‘promotional event’ and ‘100 km’.

On the surface level, when teams complete a ‘shakedown’ it appears as if they’re doing it for marketing or promotional reasons. In reality, teams can successfully perform an initial run to ensure the car’s working is as expected. This also helps teams’ avoid coming into testing completely unaware.

This neat little ‘loophole’ gives F1 teams a head start before the actual test at Barcelona. With only 6 days of testing, a single ‘promotional event’ could be a lifesaver for some teams.

The 2020 testing regulations have been tweaked, limiting the team’s ability to use screens. Under the newer regulations, F1 teams cannot employ screens while testing is going on. However, teams can still cover up when the car floor is detached or the car is being recovered.

F1 fans will get a proper glimpse of the 2020 cars in all their glory tomorrow.

Two Races in One Weekend? Red Bull F1 Has a Bizarre Suggestion for F1