What makes a great test bowler? Is it the number of wickets? The average, the strike rate or how quickly does a bowler reach a particular landmark? One such metric is by looking at who was the fastest to 300 test wickets.

Why 300 test wickets? Because generally by the time a bowler reaches the mark of 300 test wickets, he has already established himself and his numbers also help in predicting with how many wickets the bowler will end up with at the end of his career.

EssentiallySports looks at the top 5 bowlers who were fastest 300 test wickets.

Dennis Lillee led Australia’s attack for more than a decade. A complete fast bowler, he was a showman during his time and often got the crowd going.  Lillee broke Lance Gibbs’ world record of 309 Test wickets and finished with 355 dismissals in just 70 matches at an average and strike rate of 23.92 and 52.0. He has a status as one of the all-time greats.

Lillee was named in Australia’s Test Team of the Century and was also inducted in the Hall of Fame. He is now a reputed international fast bowling coach.

The highest wicket taker in test cricket with 800 wickets is one of the greatest spinners ever. He posed a real threat to all the sides when they played against the islander nation. There was hardly anyone who could pick this mysterious bowler’s doosra. Murali finished with career average and strike rate of 22.72 and 55.0 respectively. Muralitharan took 67 5-wicket halls in his test career. 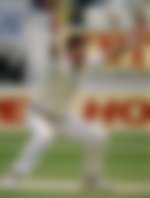 Richard Hadlee took New Zealand cricket to another level. By the time he retired from international cricket in 1990, at the age of 39, Hadlee had scripted his name in multiple pages of the record book.

As the first player to reach 400 Test wickets, Hadlee was always going to remain immortal. He, however had more to offer. He was also a hard-hitting batsman of unquestionable skill, and he is acknowledged as one of the four great all rounders of the 1980s, alongside Ian Botham, Imran Khan and Kapil Dev. Gifted with a very intelligent cricketing brain, unmatched stamina and great courage, Marshall had all the weapons in his armory from a deadly outswinger to a fatal bouncer despite the fact that he lacked in inches. His strike rate of 46.7 was tremendous and so was his average of 20.95. He was one of the finest fast bowlers of all time and finished with 376 test wickets from 81 test matches.

Undoubtedly one of the best fast bowlers across generations, Dale Steyn has a ferocious outswinger coupled with a fatal bouncer. With a very decent run up and a clean bowling action, he generates good pace and has a perfect seam position on most occasions.
He is already regarded as an all time great. Steyn has taken 417 test wickets from 85 matches at an average of 22.30 and at an excellent strike rate of 41.4.