Any match between Federer and Nadal attracts a ton of interest. It is one of the biggest, if not the biggest, rivalry in the sport. Over the passing years, the fervor around their matches has grown exponentially. However, this is not the case just for professional matches.

Federer and Nadal played the biggest exhibition match in Africa a few days back. The Match in Africa was an initiative by the Roger Federer Foundation. Its goal was to raise money for children’s education in Africa. The match took place in the Cape Town Stadium in South Africa and was a huge success.

All the Fedal exhibition matches

The Match in Africa 6 raised an astonishing $3 million on the day. At 51,954 spectators, the exhibition garnered the highest attendance ever for a tennis match. This was not the first time Fedal have played an exhibition match. The two philanthropic players have clashed in such events many times over the years. Check out all their exhibition matches below.

On November 21, 2006, Roger and Rafa Nadal played their first exhibition match. A local sports marketing company arranged the match to promote the sport in South Korea. 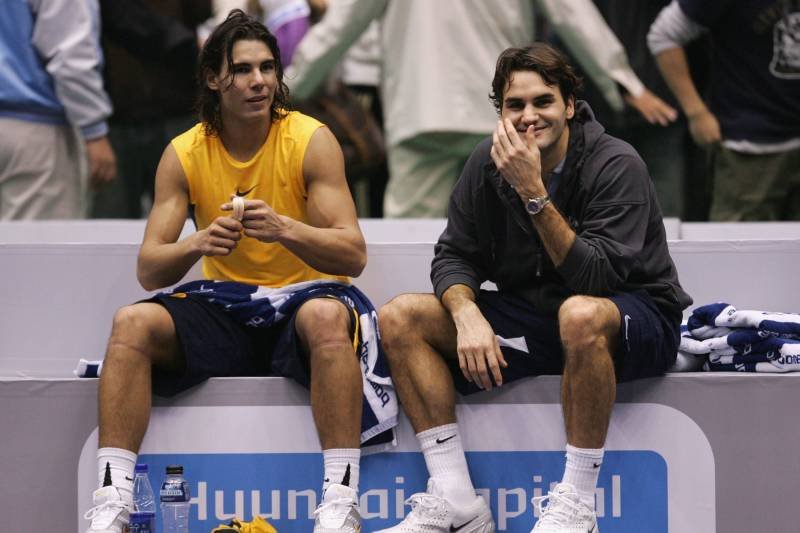 Federer won the highly competitive match 6-3, 3-6, 6-3. The match came less than a week after their Shanghai Masters clash, where the Swiss had triumphed as well.

A clash dubbed the “battle of the surfaces” had a special “a-la-carte” court constructed just for this match. On one side of the net was clay and the other side had grass planted on it. Federer was utterly dominant on the grass just as Nadal was on clay.

In December 2010, Fedal played two exhibition matches on consecutive days. Each one for the respective foundations of the players.

The first one, on 21 December, in Zurich for a charity match for the Roger Federer Foundation. Roger defeated Rafa on the hardcourt charity match 4-6, 6-3, 6-3. This was the first edition of the “Match for Africa” initiative.

The second was for the Fundacion Rafa Nadal in Madrid for an initiative called “Joining Forces for the Benefit of Children”. The Spaniard won this clash 7-6(3), 4-6, 6-1.

The 2011 Mubadala World Tennis Championship was a warm-up event for the 2011 season, which took place in Abu Dhabi in January 2011. The exhibition tournament included the top players in the world and offered prize money of $250,000 to the winner.

The Matthew Knight Arena hosted the 2011 charity event named “NIKE Clash of the Champions” on March 8, 2011. Apart from Federer and Nadal, Maria Sharapova and Victoria Azarenka too played a match between them.

The players split the proceeds, one each for the players’ respective foundations. Rafa and Roger played one set, which Rafa won 7-5.

The duo played in the December edition of the Mubadala Tennis Championship in Abu Dhabi. This time around, the two failed to reach the final but met in the match for third place.

Rafa triumphed once again, beating Roger 6-1, 7-5 on the hardcourt.

Nadal and Federer played a set on hard court as part of the International Premier Tennis League in the capital of India. Nadal won the singles set 6-5(7-4).

Furthermore, Nadal partnered up with Rohan Bopanna to beat the doubles team of Federer and Marin Cilic 6-4.

As you can see, Fedal have played quite a few exhibition matches, along with professional matches as well. The two are not just great athletes and superstars of tennis, but also two of the most kind and giving personalities in the world of sports.