With three major Battle Royale titles ruling the competitive scene right now, fans can only imagine the amount of competition between them. If one of the titles brings out a new feature, the others catch up in no time. YouTuber Top5Gaming had interestingly pointed out in one of his videos, 5 features that used to be there in Fortnite which may or may not had been inspired by Apex Legends back then.

Further reading: Microsoft Confirms That It Will Honor PS5 Exclusivity of Deathloop and Ghostwire

Fortnite had ruled the kingdom of Battle Royale for a long time until Apex came along. Apex Legends had introduced plenty of new gameplay elements to the BR genre, especially the RPG style Legends and abilities. Although its popularity had seen a little downfall for some time, the 6th Season brought back a lot of players to the yard. Overall, the game had brought a fresh new feel to the BR gameplay style.

5 features in Fortnite that are similar to Apex Legends

The ping system in Fortnite

This was an ingenious feature that Apex introduced. The ping system basically allows a player to mark positions of nearly everything around them. From alerting teammates about the position of enemies to marking the position of supplies and so on, the ping system has proved itself to be extremely valuable. Fortnite had introduced a similar ping system but with more details and advanced ping options, which is still proving itself to be as useful as they did back then. 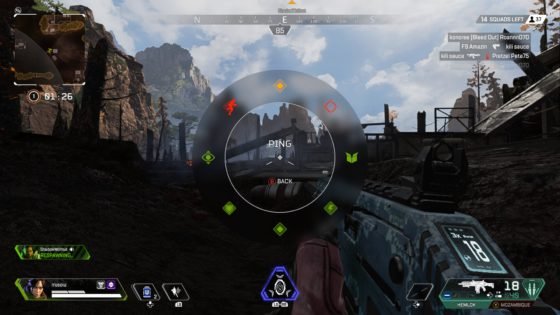 Many players had noticed the similarity between this and the balloon feature in Apex. The Giant hot air balloons found all across the King’s Canyon map used to allow players to zipline up to it and then glide off to their destination.

The season 8 Tier 100 Luxe skin had failed to impress players all that much since they expected a little more after grinding all that far. But what really hit the community was how similar the skin was to the agent Lifeline. Now, this was a pretty interesting discovery since FN launched the Luxe skin shortly after the release of Apex Legends. The hairstyle, the clothes, the resemblance is really hard to miss.

Now, this might be a far-fetched claim because this may not have been an inspiration from Apex Legends. Because FN had always had just solos, duos, and squad modes. However, the game introduced the trios game mode as an LTM almost at the same time as Apex dropped. As many fans might remember, the trios was the only mode available on Apex at that time.

This was one feature that a lot of players agreed was inspired from Apex Legends. In Apex, as many fans might know, a player can collect their dead teammate’s banner and then take it to the Respawn Beacon to bring them back to life in the match. Currently, the game has introduced mobile Respawn Beacons across all game modes.

Fortnite had introduced a feature called the Reboot Van, that worked with the same mechanism as the Respawn Beacon. Inspired or not, this feature became very popular and a fan-favorite at that. Currently, Hyper Scape has a similar system of bringing teammates back to life, called Restore Points.

With all these exciting features, it is no wonder that these titles opened up new possibilities in the world of Battle Royale games. Both Apex and Fortnite have come a long way to become two of the most popular competitive titles right now.

Fortnite Chapter 2 Season 5: Where to find all the Bosses and Exotic Weapons

Watch: TimTheTatMan Get Annoyed by Tilted Towers, Nickmercs and Cloakzy