“You Bit Me?!!” Journalist Reveals How his Michael Jordan Celebration Lead to a Colleague’s Injury

Fortnite is the biggest and most popular battle royale game out there right now. Recently, several players have complained about the issues they have faced in the game. Be it from facing controller players to server lags and bugs and even skill-based-match-making. Ninja, Tfue, CouRage, SypherPK, Bugha, everyone raised complaints, and Epic Games heard them patiently.

Update v12.50 will contain several changes, including a new game mode called Party Royale. Apparently, it is an experimental place that is still undergoing a lot of changes. This is where the central part kicks in – heavy sniper damage nerfed big time. The accuracy and effectiveness will decrease for this weapon. Along with this, aim-assist, now this is only for PC gamers using controllers. Aim-assist will see a significant drop with regards to FPS.

What Are The New Changes In This Fortnite Update?

It looks like Fortnite is taking a page from the book earlier used by PUBG and Overwatch with this new payload mode. Besides all the new challenges, new game modes, as well as new spy mode debut, the main focus will be on sniper nerf and the aim-assist part. While most are worried that this will be including PS and Xbox gamers, but hopefully, that is not the case. A mail sent to most content creators out there made it clear.

Heavy Sniper before and after v12.50:

“This build includes an AA change which makes 240hz AA act like 60hz AA, which does impact target acquisition. Investigations and tests are ongoing regarding aim assist, and your feedback is appreciated.” 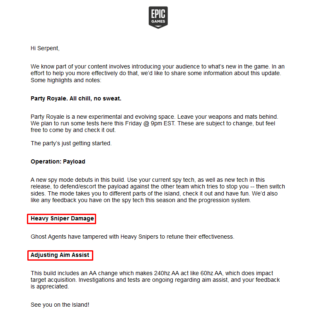 FireMonkey, Serpent, have revealed this on twitter. It is good to see that Epic Games are finally making some much-needed changes. Thanks to Serpent, we now have the official mail sent by Epic sent to content creators.

The heavy sniper is one of the OP weapons in the game. Several complaints lodged against it compelled Epic to tweak the gun. Ninja actually made a comprehensive statement when he said, “if someone wants to use a controller, they can play on Xbox. PC is made for keyboard and mouse gameplay.”

This will not affect the gamers on a console. If that was the case, then the backlash from the console users would be too risky. Also, it would be unfair as a lot of players do not have the advantages of PC. Ninja said, “I understant it is a better experience to play on the PC right? You get better frames, I’m well aware of that. Then use the mouse and keyboard.” One cannot have all the advantages, so this update from Epic might just balance the game out for the time being.

CouRage and DrLupo Already Have Their Own Fortnite Skins?