John Daly Golf Pants: Who Designs His Crazy Collection and Where Can You Buy Them?

John Daly never does anything half-heartedly. Golf, food, or alcohol? Name it and he’s topping the list with his extreme antics. However, another thing that is eye-catching about him is his bold fashion statement, most recently sported by him at the 2021 PNC Championship.

He and his son ‘Little John’, who thrashed the field at the year-ending family challenge, were in a lot of conversations for their striking and colorful pants. However, in a field of the stereotypical khaki-wearing-golfers who are only limited to experimenting with shoes or caps, the duo stood out exquisitely.

Daly’s pant game is spot on. From his multitude of statement pants that we’ve witnessed, it is quite impossible to round up five, nonetheless rank them. However, here are our top-5 favorite picks that we’ve seen over the years:

His wardrobe at the 2015 Open Championship- From black and red zebra stripes, a dollar-galore print to colorful sponge bob pants, he wore it all.

Per usual, John Daly is rocking some amazing pants at The Open. pic.twitter.com/d8y4n3E7kz

Yankees pants at the opening round of the 2019 PGA Championship- While we’re not sure whether the 2-time major champion is a Yankees fan or not, he was pictured sporting these fashionable pants.

These strikingly bright colorful pants from the 2012 PGA Championship- 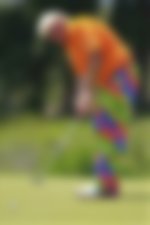 Who does not love a good pair of pineapple pants? The 2016 British Open crowd was fortunate enough to witness this extremely bold pair-

A blend of two of his favorite things; pants and alcohol! These cocktail pants certainly deserve a place on this list!

Watch This Story- How Much Did Tiger and Charlie Win at PNC Championship?

Finally, we couldn’t resist it. So, here are some other notable mentions-

How to buy the same pants as the pro golfer

If you are keen on attracting some attention to yourself in the new year, then why don’t you buy a pair of these for yourself? Created by loudmouth, also his sponsor, more than 20 quirky designs are available at a price of $118. In addition, they have a lot more golf clothing and accessories available for both men and women both.

Scott Woodworth, the mastermind behind it, revealed how this idea struck him. While hunting through his closet to wear something for a round, all he came across were khakis. A graduate of the Rhode Island School of Design, he took it upon himself to make his own line of apparel, inspired by the style of some former golfers.

What do you think of his appreciation for the bold prints?