Tiger Woods and Elin Nordegren married in 2004, and for a couple of years, they were living the best life. However, following a very publicized infidelity scandal by Tiger, a nasty divorce ensued, no doubt one of the most difficult periods in both their lives. Nevertheless, the two made it over the hurdle and went on to settle down quite well.

As for Woods, we all know he was involved with a couple of women after the years, most popularly with Olympic gold medal skier Lindsey Vonn. However, since 2017, he has been in a steady relationship with restaurant manager Erica Herman, who is quite often pictured alongside the 15-time major champion.

What happened to Elin Nordegren after her divorce from Tiger Woods?

Elin, too, got herself out of the knotty situation. However, it did not come with all cons. As a part of the divorce settlements, she got a whopping $100 million. Using that money wisely, she immediately invested in real estate and purchased a $12.25 million mansion in North Palm Beach, Florida. After demolition and reconstruction of the old property, she sold it in 2020 for $28 million.

Sometime later, Woods commented on their relationship, “We have Sam and we have Charlie. And we love them so much that we are going to do whatever it takes to make that work. That’s how it happened… I’ve talked to her about so many different things and she does the same thing with me back and forth. We communicate so much better now, it’s incredible. I wish we would have done that earlier on, but it’s been incredible to have a best friend like that.”

Who is Elin Nordegren dating?

Elin is dating a former American football tight end player, Jordan Cameron. They met through mutual friends in Florida and have been dating for quite some time. Initially, he played college football at the University of California. However, in the 2011 NFL draft, he was drafted by the Cleveland Browns and then went on to play for Miami Dolphins. 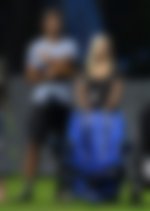 In the summer of 2019, Nordegren was spotted flaunting her baby bump, as she supported Charlie in one of her football matches. And on October 4, 2019, she gave birth to Filip Nordegren Cameron. However, soon after, they filed a petition and changed his name to Arthur.

Elin has two children from her marriage with Tiger, Charlie, 12, and Sam, 14. Meanwhile, Jordan, too, has a 12-year-old son Tristan from a previous relationship.

However, for the sake of their children, Elin and Tiger two have forged a cordial relationship with each other. From letting the kids spend extra time with Tiger after his surgery to having conflicts with each other over Charlie’s future, they’re on good terms.