The 21-year-old Bangladesh spinner, Mehidy Hasan got hurt on the side of his head and fell down while waiting for his turn to practice in the nets on Sunday. He was giving an interview as well. Though he recovered a bit, everyone is waiting for the report. As of now, it can’t say whether he would play or not. On the other hand, no injury concern from the Afghanistan side.

There could be rain tomorrow in the afternoon according to the forecast. There is a possibility that could curtail the overs as well. However, the Southampton pitch is expected to be slow, because of which batsmen might get challenges. However, spinners will be happy as they will get help from the surface.

Though both the sides never met before in the history of the ICC World Cup, they faced in the Asia Cup last year where Afghanistan beat Bangladesh by 136 runs in the group stage but lost by three runs in the Super Fours.

In the Dream 11 team for the ICC Cricket World Cup 2019 match, Mushfiqur Rahim has been named the wicketkeeper, keeping his great form in mind. He scored an unbeaten century in their last game against Australia. Though it came for a losing cause, his efforts were appreciated. He has the ability to give stability in the middle as well as anchor the innings.

The Dream 11 team also consists of three all-rounders, named Mohammad Nabi, Gulbadin Naib and Shakib Al Hasan. All the three have been in formidable form for their respective sides. While Shakib Al Hasan has already scored 2 fifties and 2 hundred for Bangladesh, Gulbadin Naib has been among runs as well as picking up wickets constantly alongside Mohammad Nabi, who nearly took his side over the finish line against India. They can cause upset anytime.

Three bowlers have been named in the Dream 11 team, named Rashid Khan, Mustafizur Rahman and Mehidy Hasan. While Rahman has taken 8 wickets so far, Mehidy Hasan is not in that good form. However, he has the ability to do good. On the other hand, Rashid Khan also failed to impress with the ball as he has taken 4 wickets so far but he can pose a great threat to his opponent anytime. As Southampton’s surface will help spinners, it would be interesting to see how Rashid Khan’s delivery will help his side.

Shakib Al Hasan and Gulabdin Naib have been chosen the captain and vice-captain of the Dream 11 team respectively of ES. 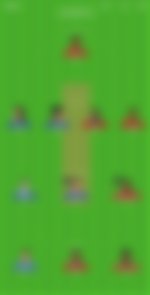