Match 28 of ICC Cricket World Cup will be seen the battle between one of the favourites in the tournament, India and the new entry Afghanistan. India have won all of their matches so far whereas Afghanistan failed to manage a win so far. This will be interesting to see whether Afghanistan could make an upset or not.

As Vijaya Shankar is trying to be match fit, India are likely to go with the same squad apart from Bhuvneshwar Kumar, who has been ruled out for a couple of games due to a hamstring injury. Mohammed Shami would be included in the playing XI. On the other hand, no injury concern for Afghanistan as of now.

There is less chance of rain and it is expected to be a sunny day and the game will take place.

Both the team haven’t met earlier in the World Cup. It would be interesting to see how they perform in the game.

In the Dream 11 team for the ICC Cricket World Cup 2019 match, Rishabh Pant has been named the wicketkeeper who has come in the squad in place of injured Shikhar Dhawan. He has the ability to anchor the innings and can be a good finisher as well.

Four batsmen have been selected on this Dream 11 team, Noor-Ali Zadran, Rohit Sharma, Virat Kohli and KL Rahul. All three Indian players have been in the formidable form where Rohit Sharma already scored a century and Kohli, Rahul scored the fifties with ease. Zadran also an important player in Afghanistan’s line up who can give stability to their game.

The Dream 11 team also consists of three all-rounders, named Mohammad Nabi, Gulbadin Naib and Hardin Pandya. All three have been pretty good with their all-round performances and have the ability to win the game for their side- be it with the bat or ball.

Three bowlers have been named in the Dream 11 team, named Dwalat Zadran, Jaspreet Bumrah and Kuldeep Yadav. While Zadran has 5 wickets so far, Bumrah is known for his yorkers and early breakthroughs. However, Kuldeep Yadav has also returned in the form and took a couple of wickets in their last game. All of them are expected to do well in the game.

Rohit Sharma and Virat Kohli have been chosen the captain and vice-captain of the Dream 11 team respectively of ES. 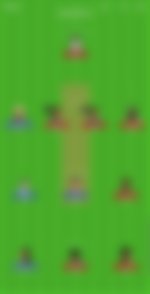